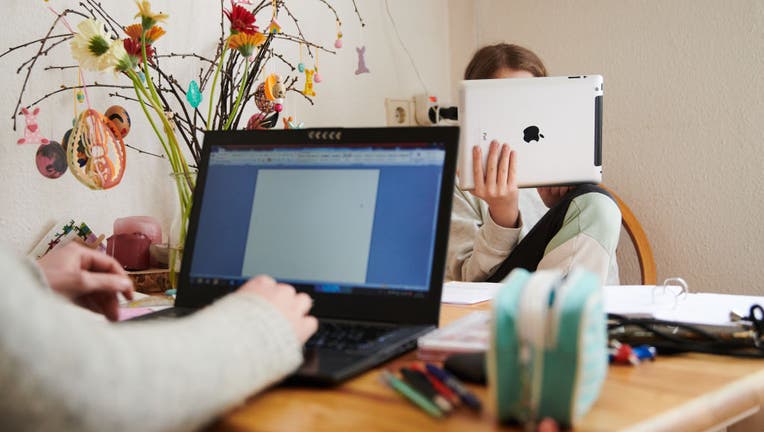 FILE IMAGE - A mother works at the kitchen table while her daughter looks into a tablet across from her. (Photo by Annette Riedl/picture alliance via Getty Images)

SEATTLE - Balancing a career with parenthood can be challenging, particularly if access to proper child care is limited — as became even more evident during the COVID-19 pandemic when many schools and daycare centers closed.

A recent survey of U.S. parents with at least one child under the age of 18 found that a majority (56%) reported that they have prevented or postponed career-related activities due to inadequate child care access, and working mothers were more likely to bear the brunt. Nearly two-thirds (64%) reported negative impacts on their day-to-day lives due to child care issues, such as their mental health and work-life balance.

The survey, conducted by the college ranking and informational site BestColleges.com, involved 759 parents or guardians who answered questions between March 21 through March 28. Child care access was defined as parents being able to reliably place their child "in an arrangement that provides quality development for the child while parents/guardians are unable to care for them," with a reasonable effort and affordability.

Roughly 32% of parents nationwide said they agree that inadequate child care access has hindered their ability to achieve their career goals, while 43% said they disagree.

Nearly one-fifth of parents (18%) reported that issues with child care have prevented or postponed career activities such as earning a living wage or acceptable salary, getting a job, increasing their lifetime earnings potential, and pursuing education or training for career advancement, according to the survey.

A majority of respondents (59%) agreed that parents without adequate child care access are at a disadvantage when it comes to employment and career advancement. Some 57% of respondents said people should not have to choose between pursuing a career and being a parent.

When asked, most (58%) also agreed that sufficient access to child care would have a positive economic impact, and 56% believe the government should take steps to improve child care access, according to the survey.

"It's no secret that parents constantly juggle many responsibilities," Jessica Bryant, analyst for BestColleges.com, said in a statement. "Child care access falls short for many parents, but adequate access is critical for working parents to be able to balance work and family commitments."

Joe O’Connor, CEO of 4 Day Week Global, discusses the changing attitudes of work culture and how both employees and companies have been shown to benefit from reduced working hours.

The survey found a notable difference between working mothers and fathers. Females were significantly more likely to report that they have been prevented from getting a job or postponed getting a job due to issues with child care compared to their male counterparts (25% vs. 10%).

Fathers in the survey were significantly more likely to say inadequate access to child care had not prevented or postponed any aspects of their career, compared to mothers (46% vs. 31%).

The pandemic had a devastating effect on employment overall, but particularly on working mothers, according to the U.S. Census Bureau. It reported around 10 million U.S. mothers not actively working in January 2021, which was 1.4 million more than during January 2020 — which was before the onset of the pandemic.

The U.S. Census Bureau cited multiple reasons at the time, including mothers being more likely to work in service and other jobs heavily impacted by pandemic closures. It also noted how mothers carry a heavier burden, on average, of unpaid domestic household chores and child care, which "disrupts parents’ ability to actively work for pay."

Overall, mothers across all races and ethnic groups faced challenges in the labor market but non-White single mothers were hit hardest, the agency said.