Preliminary hearing for parents charged in death of 15-month-old

In graphic testimony, a Farmington Hills Police Detective explaind what he learned from multiple interviews with the parents of a 15-month-old who was abused and killed in a motel room in October.

FARMINGTON HILLS, Mich. (FOX 2) - Farmington Hills Police said the homeless couple accused of abusing and murdering their 15-month-old son last fall called their baby a demon on multiple occasions and the baby was subjected to graphic beatings with a phone cord, hanger, and their hands.

Isaias Porras and his wife, Amanda, were both charged in the death of their son, Isaiah Daniel Porras-Jajou, on Oct. 3, 2021. On Friday, April 29, the parents were in court for a preliminary exam where graphic and gripping details were unveiled by police and detectives who found the baby's body.

Police said their investigation began when they were called to do a welfare check on the child around 5:30 p.m. that day. According to police, the toddler and his parents were long-stay residents at the Motel 6 on Grand River and 10 Mile.

Kosal went up to room 257 and knocked multiple times. He said there was no movement or noise from inside the room so he went to the grandmother, who rented the room, and got a room key.

When he returned the second time, he knocked and said he had a key and would enter. Only then did Amanda open the door.

Kosal said she opened the door a crack, just enough to have a conversation, for a few minutes. He said Amanda claimed that her son was with her grandmother, but Kosal explained he had just spoken to the grandmother and Isaiah wasn't with her.

A few minutes later, Kosal said Amanda opened the door fully and he said that the room appeared to be packed up, as if they were about to leave. He said there was not a child visible but there were items, including a stroller, that indicated a child was in the room at some point.

He said at that point, it had started to rain extremely hard outside and he was instructed to enter the room to get out of the weather. Once inside, he checked under both beds and moved the stroller. Then he moved blankets on one of the beds. That's where he reported finding Isaiah - under two blankets and a pillow - and with red marks on his face.

Kosal said it was very clear that he had passed away.

Kosal was then dismissed as a witness and the lead investigator, Det. Robert Gerak, was called next. The details of what Gerak learned from Isaias and Amanda are stunning and graphic at times.

Gerak explained that officers entered the room because of the incoming storm. He said they also spoke with the grandmother who said she had learned from Amanda that the baby had at least three head injuries.

When the baby was found, both Amanda and Isaias were arrested. They were both read their rights at the police station and that was a bit of a sticking point for the defense, who questioned whether Isaias wanted an attorney or not. He had indicated yes he wanted an attorney but then also indicated he wanted to proceed without one, Gerak said.

The judge ultimately said that detectives did enough to preserve his rights and allowed the questioning to continue.

On Oct. 3, the first time Isaias was questioned, he told the detectives he had slapped the child with his hands at first but it progressed into using a phone charging cord and eventually a coat hanger. Gerak said that the beatings started in mid-September and that Isaias said that the child was a distraction to their trading business and he believed "he was stupid and causing a scene". 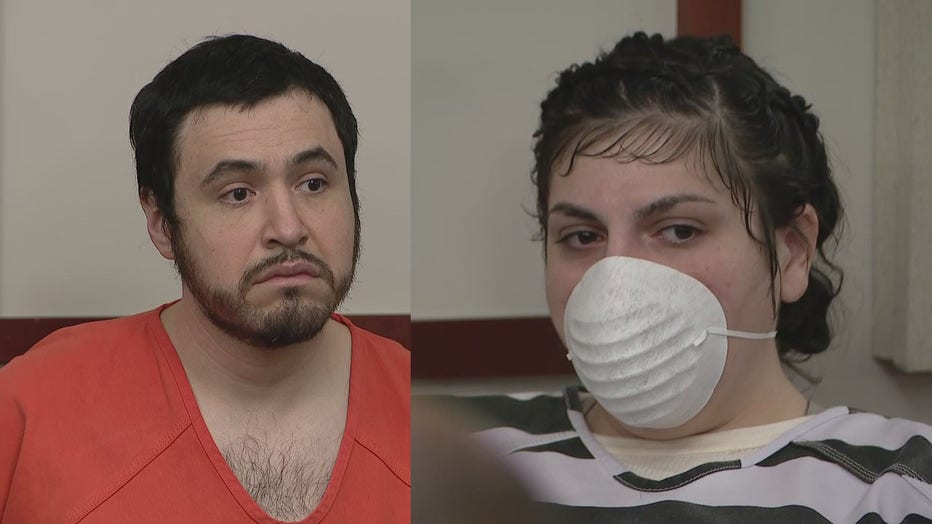 The 15-month-old baby was in his playpen inside the motel that day when Isaias told the detective he forcefully picked up the baby, to the point the baby's head and neck snapped in a way that caused him to convulse.

Amanda was present at the time and Isaias said they both stuffed a cloth in the baby's mouth and then tied it around the back of his head to keep it in his mouth.

Gerak said Isaias told him he was ‘treating’ the baby and that the 15-month-old was in trouble around 2 a.m. on Oct. 3. He said he tried water therapy in the bathtub, ‘iso biofreeze therapy’, and CPR.

Isaias told the detective that the baby was convulsing for a while and he eventually put him back in his playpen.

That conversation all happened on Sunday, Oct. 3.

The next day, the autopsy results were in and and Isaias returned for a second interview with detectives. After the autopsy, photos showed the boy had bruises on his body including one on the left side of his head with a bruise.

"He looked at that photograph and he said 'I did that'," Gerak said.

The detective said he hit the baby with the back of his fist.

There were more injuries to Isaiah, however. Detective Gerak said he was bruised ‘head to toe’ including some on his legs, just above his knees which Isaias described as ‘finger slaps’.

"It looked like you could see impressions from a palm print and three fingers on each leg that looked like the type of pressure you use to hold somebody down," Gerak said.

Another injury formed a triangle shape on his stomach. Gerak said Isaias admitted this came from a hanger.

"There was a very large injury to the child's midsection, sort of a triangle shape - an elongated triangle shape - I believe he called it a goncho, which he described as a hanger," Gerak said.

He said that he noticed that Isaias had injuries too.

"I also noticed his knuckles. I saw that he had injuries to the knuckles on his right hand," Gerak said.

Isaias told the detective those injuries were from hitting the baby in the head on Saturday.

There was a third interview, prompted by Isaias' request, although Gerak could not recall why.

During that interview, he told the detectives that he hit the child ‘out of ignorance’.

The attorneys for Isaias and Amanda then questioned detective Gerak, specifically about Isaias' mental state.

"After the second interview, as we were getting towards the end of the interview, he said that his son wanted to cross over' and then after we told him to stand up and we were going to take him back to his cell, he said something about him (Isaias) wanting to cross over," Gerak said. "We asked him if he was intending to kill himself, which he denied."

Isaias was placed on suicide watch as a result of this conversation.

Gerak said it didn't appear at any time that Isaias was under the influence of drugs or alcohol. He also said that he said multiple times that his 15-month-old son had demonic behavior.

"I believe he called his son a demon - multiple times," Gerak said. "I indicated in report that his behavior was bizarre. The way he spoke when referencing the baby - he said the baby could carry on adult conversations, claimed the baby was attacking him and Amanda."

As far as interviews with Amanda went, Gerak said they also spoke on three different times, the first coming in the evening of Sunday, Oct. 3 or early on Monday, Oct. 4, where Amanda admitted to hitting the child.

"She said both her and Isaias had taken turns slapping the baby. She said in the past couple weeks they had 'taken extra better care of him'," Gerak said.

Amanda said the baby's body was shutting down on Sunday and Isaiah was convulsing. In response to this, she said she tied his hands together.

"She used a phone charging cord and bound his hands in front of him," Gerak said. "(He did this) because his arms were flailing around from the convulsions."

Gerak said she also described her son as having as a demon.

"She also referred to her baby as a demon. She said there was a lot of paranormal activity in the room," he said.

"She said that she witnessed Isaias beating the kid. She also participated in striking him because she ‘wanted to keep it equal’," Gerak said.

Amanda told Gerak she would do ‘finger slaps’ and also flicked the baby in the face with her middle finger in what she called ‘corrective behavior’, according to Gerak.

The prosecuting attorney then brought up text messages, specifically one where Amanda was asking her mother for money.

"She said she wanted to go back to Denver to "plant" the baby," Gerak said. "Plant, like a seed."

That message was sent while the boy was still alive but she told Gerak that was when ‘while he was getting there’.

Gerak said Amanda thought about calling 911 but Isaias told her that he could heal the baby. He said she never approached anyone for help and acknowledged that she could have done more.

She also said that what Isaias was doing to the baby was wrong, Gerak said

"She said Isaias was trained in paramedicine and believed that he could heal the baby," he said.

Amanda admitted to watching her husband beat the baby, which she described as ‘brutal’, according to Gerak.

Gerak said they spoke for a third time as Amanda wanted to explain what happened - and why. She said after the baby had been beaten, she smoked marijuana and laid down next to the baby.

Amanda's attorney had a chance to question him next, where she questioned about Amanda's rights.

Gerak and Amanda spoke at the scene while she was in the back of the police car. He said she was not under arrest at the time of the conversation and he ultimately read her Miranda Rights at the police station. That's where he asked if she had been ‘brain-washed' her.

In response, she said he was ‘coaching her’ and that he had assaulted her.

The attorney asked about Amanda's phone and whether she had granted him permission to go through the device.

"I remember asking her at the scene originally when we spoke and the topic came up again because she had several different devices. She had volunteered or offered us - actually instructed us, to go and look through her phone. That's when I believe (the other detective) asked her for a pin, I said I already have it. She says ‘no, it’s a different phone',"

Gerak said she provided the pin for that phone as well.

During the interviews, Gerak said she didn't appear to be under the influence and she cooperated and understood what was being discussed.

The preliminary hearing wrapped at this point for the day but a fifth witness will be called at the next court hearing, which was not set on Friday.