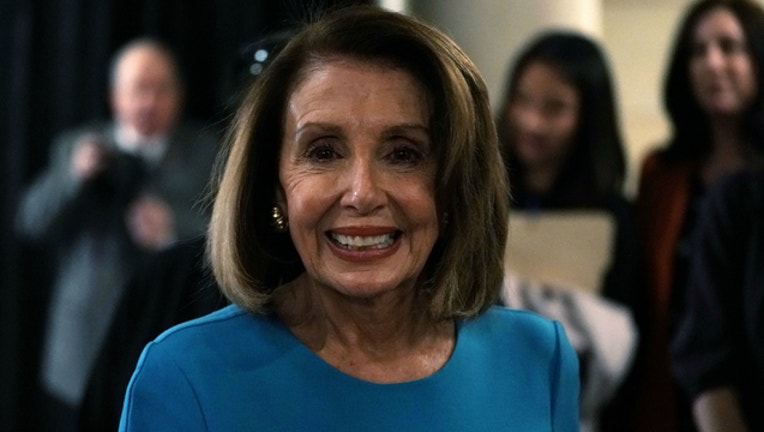 WASHINGTON - Nancy Pelosi was nominated by fellow Democrats to be House speaker on Wednesday, but she still faces a showdown vote when the full House convenes in January.

Pelosi entered the closed-door caucus election in an unusual position -- running unopposed for the nomination despite the clamor by some Democrats for new leadership. The lopsided 203-32 tally showed both the weakness of her opposition but also the challenges ahead.

The California Democrat has been deftly picking off opponents — including nine who announced their support as voting was underway -- a trend she'll need to accelerate to reach the 218-vote threshold for election when Democrats take control of the chamber in the new year.

"Are there dissenters? Yes," the California Democrat told reporters as the ballots were being counted. "But I expect to have a powerful vote going forward."

Pelosi was nominated by Rep. Joe Kennedy of Massachusetts, with no fewer than eight colleagues seconding the choice, including Rep. John Lewis of Georgia, the civil rights leader, and three newly elected lawmakers.

As House Democrats met in private in the Capitol, they faced a simple "yes" or "no" choice.

A sign of the party's mood emerged early as the House Democrats elected Rep. Hakeem Jeffries of New York as caucus chairman, elevating the charismatic 48-year-old from the Congressional Black Caucus as a new generation of leaders pushes to the forefront.

His slim victory in that race, 123-113, over veteran Rep. Barbara Lee of California, another influential member of the Black Caucus, offered a window into the shifting landscape. Flanked by top progressive leaders, Lee made her pitch during the closed session, drawing on the record number of women, including minority women, who ran for office and are entering the new Congress.

The majority, though, went to Jeffries who used his speech to remind Democrats of their core accomplishments -- from passage of the Civil Rights Act to the Affordable Care Act -- before pivoting to his vision for the future.

"I'm focused on standing up for everyone -- white, black, Latino, Asian, Native American -- every single American deserves us, here in the United States Congress to work, Democrats and Republicans, on their behalf to make their life better," he said afterward.

Democrats voted to return their entire top leadership team, including Rep. Steny Hoyer of Maryland in the No. 2 spot as majority leader and Rep. Jim Clyburn of South Carolina in the No. 3 spot as whip. They were running unopposed.

"The caucus is coming together," Clyburn said.

In a letter to colleagues ahead of voting, Pelosi gave a nod to those clamoring for change.

"We all agree that history is in a hurry, and we need to accelerate the pace of change in Congress," she wrote, noting the "historic" class of new first-term lawmakers, the largest since Watergate, who led Democrats to the majority in the midterm election.

Pelosi's opponents had pledged to usher in a new era for Democrats. But one by one, the powerful California congresswoman picked off the would-be challengers and smoothed skeptics.

Ahead of voting Wednesday, a deal was reached with the Problem Solvers Caucus, a bipartisan group whose nine Democratic members were withholding their support as they pushed for rules changes to allow a more open legislative process.

But another group against her, led by Rep. Seth Moulton of Massachusetts, Rep. Tim Ryan of Ohio and Rep. Kathleen Rice of New York, left the leader's office empty-handed. They asked Pelosi to publicly release her plans to transition out of leadership before the end of the next term in 2020. She declined, they said.

"There has to be some succession plan," Rice said.

For now, there was no one willing, or able, to mount a serious campaign against her bid to reclaim the speaker's job, which she held from 2007 to 2011, before the GOP took back the majority.

"You can't beat someone with no one," said Rep.-elect Jahana Hayes, D-Conn. She said she came to Washington eager to hear from colleagues and "hopeful that many candidates would step up to the plate." But "the only person that declared their intentions, spoke to me about their vision and asked me for my vote is Nancy Pelosi."

Pelosi still lacks the votes she'll need in January, when the new Congress convenes, to ascend to the post.

One member who signed a letter being circulated by opponents, Rep. Linda Sanchez of California, said the real fight will come in January.

"The battle is the floor," Sanchez said.

Those trying to oust Pelosi say they always knew the internal caucus election would fall in her favor. She only needed a simple majority of Democrats, who have a 233-seat majority, with several races still undecided, to win the nomination.

But she'll need 218 votes in January, half the full 435-seat House, which is harder, if all Republicans vote against her, as is likely — though she could win with fewer votes if some lawmakers are absent or vote present.

Opponents, who insist there will be more than enough votes to stop Pelosi in January, say only with a floor fight in view will new leaders emerge. They say there are plenty of Democrats who could step up to the job.

But Pelosi's ability to stand unopposed Wednesday, despite the threats from within and reams of attack ads against her, showed the staying power of her brand of machine politics.

She was the first female speaker and hopes to return to a role few men have reclaimed — most recently, legendary Speaker Sam Rayburn a half-century ago.

"The reality is there is no alternative," said Rep. Brian Higgins, D-N.Y., who had signed on opposing her but reversed course.

Between now and January, Pelosi will work the levers of power by doling out the many committee seat assignments, subcommittee chairmanships and other perks she is able to offer, or withhold, as incentives.

"She's making a lot of headway," said Rep. Joyce Beatty of Ohio, an ally. "Has she negotiated and given them some of the things that they want? Yes. But she's only giving things to people who can deliver."