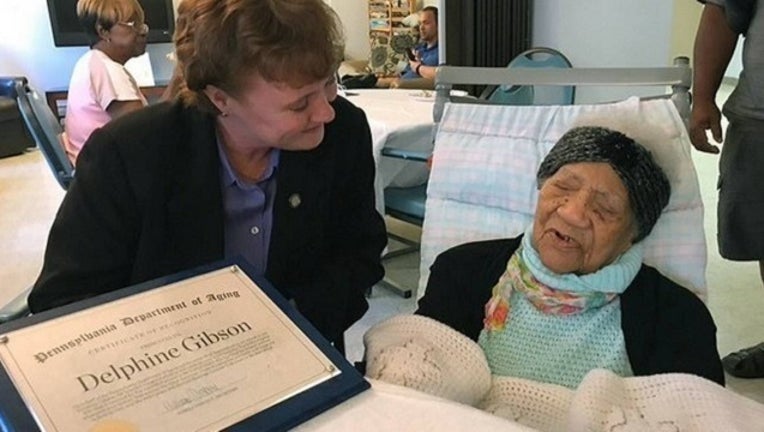 HUNTINGDON, Pa. (AP) - A 114-year-old Pennsylvania woman who was the oldest person in the United States has died, according to a funeral home.

Lessie Brown, of Cleveland Heights, Ohio, 113, is now believed to be the oldest American, according to the Gerontology Research Group in Sandy Springs, Georgia.

Gibson, who had been living at a Huntingdon nursing home since 2004, when she was 100, attributed her long life to good food, her faith in God and her church.

"Frances and I are saddened to hear of the passing of Delphine Gibson, America's oldest citizen," said Democratic Gov. Tom Wolf. "She was an incredible Pennsylvanian and she will be missed."

Although she was blind and deaf near the end of her life, she still enjoyed singing and humming songs like "Amazing Grace," nursing home unit manager Miranda Glover told reporters in February 2017.

She took no medication except for a single vitamin a day, Glover said.

"She has an amazing spirit," Glover said. "She always singing to us or sharing the gospel. She is a treasure to the nation."

Kammi Plummer, admissions director at AristaCare at Huntingdon Park, where Gibson lived most recently, told the Altoona Mirror she informed Gibson when she became the oldest living American.

"She just kind of acted surprised and said, 'You don't say?'" Plummer said. "We also told her she was she prettiest. She just said, 'I know that.'"

Born Delphine Tucker on Aug. 17, 1903, in Ridgeway, South Carolina, she helped on her family's farm until she married Taylor Gibson in 1928.

The couple lived for a time in North Carolina then moved to Mount Union to join a growing community of African-Americans who came up from the South to work in the area's now-historic brickyards. The couple had three children.

Her husband worked at Harbison Walker Refractories for 20 years before retiring in 1962, according to his obituary. He died in 1980.

Gibson's funeral will be Saturday at Mount Hope Baptist Church in Mount Union.