The Eastland complex fire continues to burn thousands of acres, as multiple agencies across the state try to put out flames.

CARBON, Texas - The Eastland complex fire continues to burn thousands of acres, as multiple agencies across the state try to put out flames.

Dozens of homes have been destroyed, and according to the Texas A&M Forest Service, there have been new requests for assistance on wildfire relief.

Meanwhile, the fire is still only 15% contained as of Saturday afternoon.

Most people don’t know how they would react if they lost nearly everything.

"All you can do is just move on," said Seth Griffin, whose mother’s home was destroyed by wildfires.

Seth is trying to salvage a few of his mother’s belongings after wildfires destroyed much of her community in Carbon.

"She doesn’t show her emotions, but I mean inside, you know, she’s broken," he said.

His mother, Mary Griffin, was at First Baptist Church of Eastland on Saturday, two days after fires swept through the town.

"It just kept getting stronger and stronger," she recalled.

She said there was no time to prioritize what to save during Thursday’s evacuation.

"We had officers say, ‘Y’all need to leave,’ and I was just grabbing stuff because I had to leave," she said.

First Baptist Church is accepting all sorts of donations for ones who are left with next to nothing.

"We will have all of these supplies indefinitely here so people can come get them because I think, right now, so many are shell-shocked at losing everything," explained Mandi Whittlesey, who is music minister, First Baptist Church of Eastland. "We just need people to come, tell us where to take it or come and get it, because it’s here."

It’s also housing members of Texas Task Force 1 while they assist in fighting the wildfires.

The wildfires have destroyed homes, vehicles, and countless possessions. 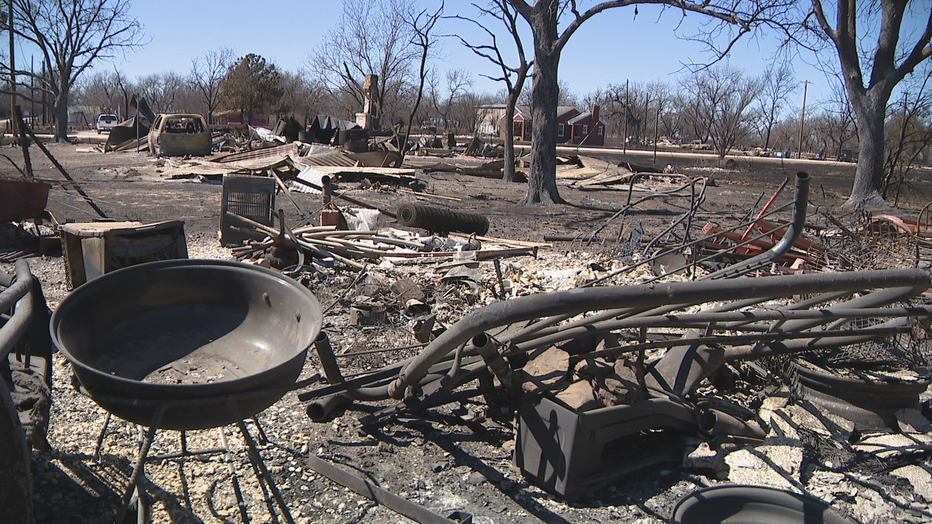 The town of Carbon is made up of only a few hundred people. People might say the ones living there live together as one big family.

Now, they are having to rebuild as one big family.

Still, the fires are not contained. Of the 45,000 plus acres burning, there is only 15% containment.

Some, like the Griffins, are already experiencing the worst of it.

"Don’t let it affect you because it ain’t going to solve nothing," Seth said. "You know, you just got to be happy-go-lucky and take the best with it and there you go."

They understand most of what’s lost is tangible. Items like a charred gun, however, Mary said is sentimental.

Her husband gave it to her last year. He died seven months ago.

Thousands of items are gone. Few remain, but each with a story.

"My dad’s dog tags. We found those yesterday. So, his military dog tags. He was in the Army," Seth said.

For each item saved, like a hand-me-down dish from Mary’s mother, there’s a sense of appreciation.

"If we could find those things then, you know, that’s good enough for us," Seth said.

An appreciation only understood while facing tragedy.