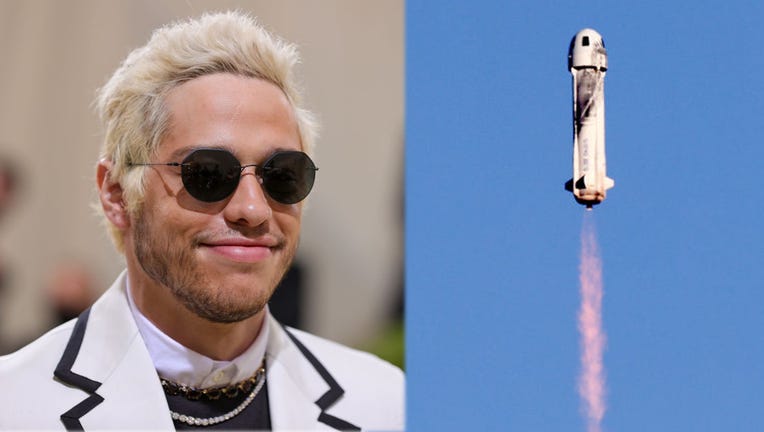 Blue Origin had said earlier this week that Davidson, 28, would be a part of the company’s fourth human flight and 20th flight overall for the New Shepard program on March 23. But the launch was rescheduled for March 29, the company said on Twitter.

"Blue Origin's 20th flight of New Shepard has shifted to Tuesday, March 29. Pete Davidson is no longer able to join the NS-20 crew on this mission," Blue Origin wrote in part. "We will announce the sixth crew member in the coming days."

No further details were immediately given.

The comedian and actor, who joined the "SNL" cast in 2014, had been scheduled to fly as "honorary guest," a Blue Origin spokesperson told the New York Times. The five other passengers, who are paying customers, were identified as Party America CEO Marty Allen, philanthropist and Tricor International CEO Marc Hagle and his wife, Sharon Hagle, who founded the nonprofit SpaceKids Global, teacher and entrepreneur Jim Kitchen and Commercial Space Technologies President Dr. George Nield.

The ticket price was not disclosed.

Passengers of the automated capsule soar to an altitude of 66 miles, feeling a few minutes of weightlessness before parachuting into the desert. Liftoff occurs from Blue Origin's launch complex near Van Horn, Texas, and is streamed live.

It remained unclear if Blue Origin would select another celebrity to replace Davidson, who also starred in the 2020 film "King of Staten Island" and 2021 animated comedy "The Freak Brothers," has made entertainment headlines in recent weeks for his relationship with Kim Kardashian and enduring online attacks from her former husband Kanye West.

For previous flights, Blue Origin has enlisted "Star Trek" actor William Shatner, 90, who became the oldest person to reach space in October aboard a Blue Origin flight. Shatner called the flight "the most profound experience I can imagine."

Actor William Shatner, known to many "Star Trek" fans as Captain James T. Kirk, rocketed into space aboard a Blue Origin flight. After exiting the capsule, Shatner struggled to find the words to describe the experience while speaking with Blue Origin founder, Jeff Bezos.

"It’s an honor. I’m so filled with emotion about what just happened," Shatner told Jeff Bezos moments after the flight, no longer able to hold back tears. "I just, it’s extraordinary, extraordinary."

Bezos, who founded Amazon six years before Blue Origin, was on his company’s debut launch in July. The second, in October, included Shatner — Captain James Kirk of TV’s original "Star Trek." The late Leonard Nimoy’s daughter sent up a necklace with a "Vulcan Salute" charm on the Oct. 13 flight in honor of the show’s original Mr. Spock.

Private U.S. companies had a multitude of launches in 2021, signaling the year of space tourism finally taking off. Virgin Galactic kicked it off in July, sending up its billionaire founder, Richard Branson, followed by Blue Origin and Elon Musk’s SpaceX.

So many are flying that the Federal Aviation Administration announced in December it will no longer designate who is a commercial astronaut or give out wings.