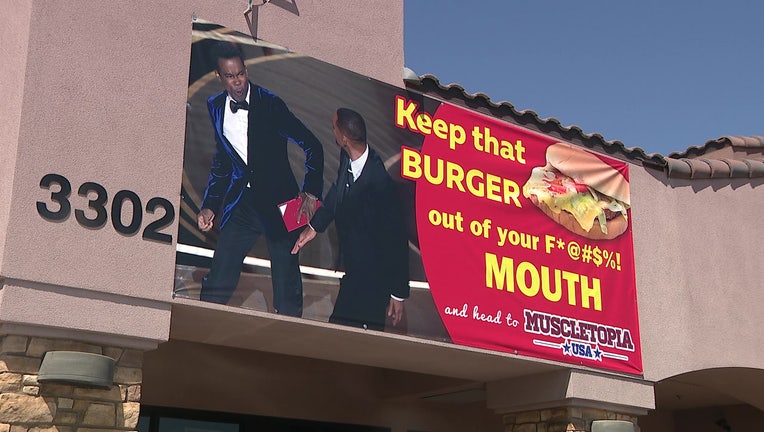 A gym in the Phoenix area with a poster that was inspired by the Will Smith incident during the 2022 Oscars.

PHOENIX - A gym in the Phoenix area has capitalized Will Smith's now-infamous slap of Chris Rock during the Academy Awards for a poster that appears to be aimed at those on their fitness journey.

The poster was put up at a gym located near 24th Street and Osborn, and the gym is located near a fast food store in the area. The sign sports a photo showing the moment Smith slapped Rock, with the words "Keep that burger out of your mouth," which is a reference to Smith's words for Rock during the incident, when he asked Rock to keep Smith's wife, Jada Pinkett Smith's name out of his mouth.

The gym's owner, Ivan Almonte, said they are having conversations with people about what happened, as well as fitness and getting in shape.

Almonte said several people have been stopping by to take pictures of the sign, and also inquire about joining the gym.

Smith could face more disciplinary actions from the Academy

In the aftermath of the now-infamous slap, Smith has announced that he will resign from the Academy of Motion Picture Arts and Sciences, but officials with the Academy say more disciplinary actions could be taken against Smith.

Smith's family members said they are trying to be there for the now-controversial actor.