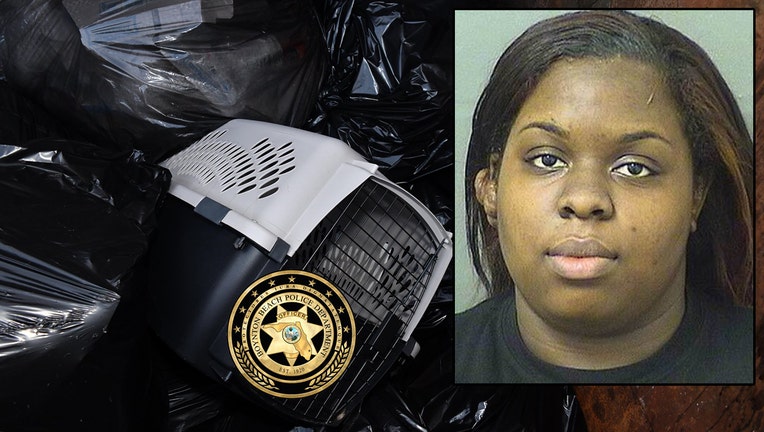 BOYNTON BEACH, Fla. - A Florida woman was arrested after police say she neglected her dogs, then threw their bodies in a trash bin when they died.

A cleaning crew found the bodies inside pet crates that were tossed in the trash in November and called authorities.

According to the South Florida Sun Sentinel, Hinds adopted the dogs — a white miniature poodle named Paris and a white/brindle pit bull named Karma — and kept them in plastic crates.

The veterinarian concluded that the dogs were “neglected over a long period of time and deprived of basic life-sustaining needs, specifically food, water and medical care,” according to the report.

MORE NEWS: Mama dog found dragging crate filled with her puppies on side of road

The dogs reportedly had overgrown nails, dirty ears and nails and matted coats. Police say Hinds told them she found the dogs dead when she returned from vacation Nov. 22.

“This is one of the most disturbing cases I have ever worked,” said Animal Cruelty Investigator Liz Roehrich said, who is a 27-year veteran of the Boynton Beach Police Department. “These dogs experienced extreme suffering, and then their bodies were tossed in a dumpster like yesterday’s trash. We are grateful to the cleaning crew who discovered them and called us.”

The police report also states that on the day that Hinds allegedly threw her dogs in the trash, she went to Animal Care and Control to pick up another dog she had recently adopted.

Hinds  is charged with animal cruelty and improperly disposing of animals.