Dr. Kristen Oertel, the chairperson of the Department of History at the University of Tulsa, discusses the Tulsa Race Massacre, one of the worst incidents of racial violence in U.S. history, ahead of the event's 100-year anniversary.

"Today we have actually commenced with the process of excavating four individual burials," Stackelbeck said, while the search continues for additional remains.

The 1921 massacre occurred when a white mob descended on the Black section of Tulsa — Greenwood — and burned more than 1,000 homes, looted hundreds of others and destroyed its thriving business district. Most historians who have studied the event estimate the death toll to be between 75 and 300.

The remains that have been found will be transferred for examinations led by forensic anthropologist Phoebe Stubblefield. 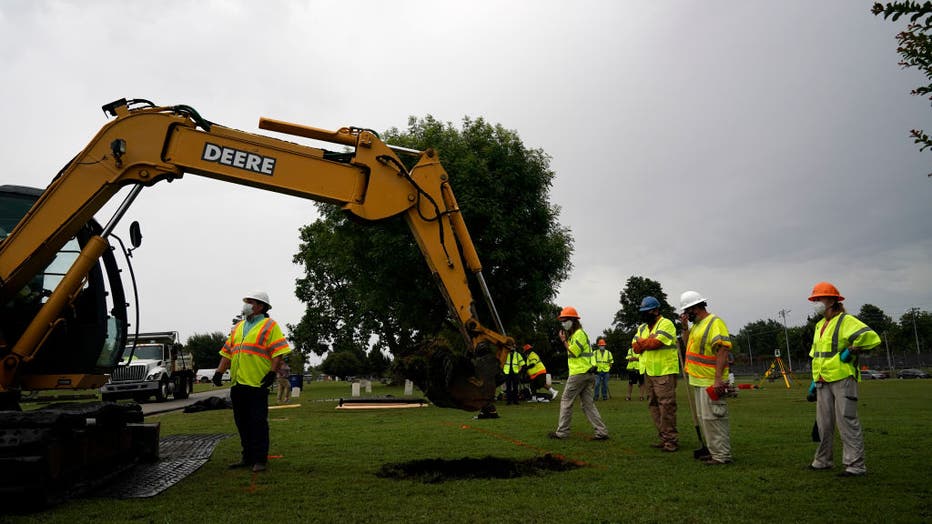 Archaeologists and observers watch during a test excavation of the 1921 Tulsa Race Massacre Graves at Oaklawn Cemetery in Tulsa, Oklahoma on July 13, 2020.

Both Stackelbeck and Tulsa Mass Graves Investigation Public Oversight Committee Chairman Kavin Ross said it's possible the remains are from people who died from other things, such as the Spanish Flu pandemic that killed an estimated 7,350 in Oklahoma in 1918 and 1919.

Stackelbeck said the number of remains found in Oaklawn Cemetery now stands at 27, up from 20 discovered as of last week, and that all have been found in coffins.

The search began last year, and researchers in October found at least 12 sets of remains, although the remains were covered back up at that time for further study.

Stackelbeck has estimated more than 30 bodies could be in the site. Searches of two other sites are planned.