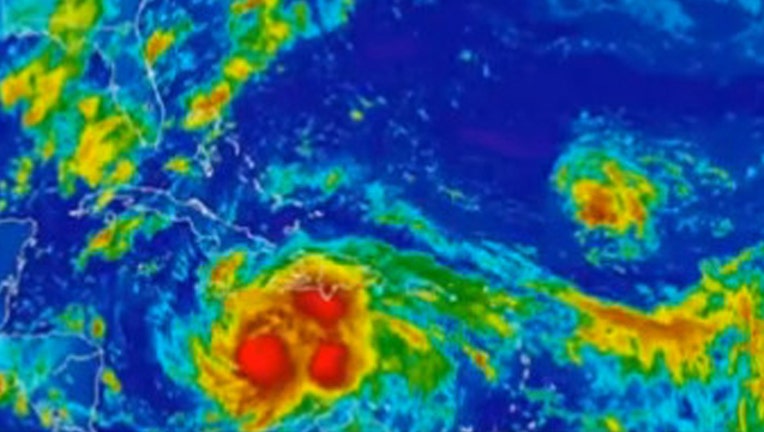 LEOGANE, Haiti (AP) — Hurricane Matthew roared across the southwestern tip of Haiti with 145 mph winds Tuesday, uprooting trees and tearing roofs from homes in a largely rural corner of the impoverished country as the storm headed north toward Cuba and the east coast of Florida.

A fisherman was reported drowned in Haiti as the storm closed in, and four deaths were recorded in the neighboring Dominican Republic, bringing the death toll from Matthew's path through the Caribbean to at least seven.

The dangerous Category 4 storm blew ashore around dawn in a corner of Haiti where many people live along the coast in shacks of wood or simple concrete blocks.

Matthew was inflicting major damage, though the extent was not immediately known, said Marie Alta Jean-Baptiste, director of the country's Civil Protection Agency.

"It's much too early to know how bad things are, but we do know there are a lot of houses that have been destroyed or damaged in the south," Jean-Baptiste said.

Many streets were flooded or blocked with fallen trees throughout the southwestern peninsula. Rivers surged with muddy water as heavy rain fell. Local radio reported that the water was shoulder high in parts of Les Cayes, near where Matthew came ashore.

Milriste Nelson, a 65-year-old farmer in the town of Leogane, said his neighbors fled when the wind ripped the corrugated metal roof from their home. His own small yard was strewn with the fruit he depends on for his livelihood.

"All the banana trees, all the mangos, everything is gone," Nelson said as he boiled breadfruit over a charcoal fire in the gray morning light. "This country is going to fall deeper into misery."

Haitian authorities had tried to evacuate people from the most vulnerable areas ahead of the storm, but many were reluctant to leave their homes. Some sought shelter only after the worst was already upon them, making their way through debris-strewn streets amid pounding rain.

"Many people are now asking for help, but it's too late because there is no way to go evacuate them," said Fonie Pierre, director of Catholic Relief Services for the Les Cayes area, who was huddled in her office with about 20 people.

Matthew was expected to bring 15 to 25 inches of rain, and up to 40 inches (100 centimeters) in isolated places, along with up to 10 feet (3 meters) of storm surge and battering waves.

"They are getting everything a major hurricane can throw at them," said Dennis Feltgen, a meteorologist with the U.S. National Hurricane Center in Miami.

The storm was moving along the Windward Passage between Haiti and Jamaica, where it was dumping heavy rain that caused flooding. It was headed for southeastern Cuba and then the Bahamas. The center of the storm was projected to pass about 50 miles northeast of the U.S. naval base at Guantanamo Bay, Cuba.

Forecasters said Matthew could menace Florida toward the end of the week and push its way up the East Coast over the weekend.

"We do not know yet whether the center of Matthew will actually come ashore in Florida. That's possible," said Rick Knabb, director of the hurricane center. "It also could go to the right and stay farther offshore. The farther offshore it is, the lesser the impacts will be, but the impacts are going to happen no matter what."

Cuba's government declared a hurricane alert for six eastern provinces, and workers removed traffic lights from poles in the city of Santiago to keep them from falling.

In the U.S., Florida Gov. Rick Scott urged residents along the state's Atlantic Coast to prepare for the possibility of a direct hit, and the Red Cross put out a call for volunteers in South Carolina.

As dawn broke, people in the Haitian tourist town of Port Salut described howling winds and big waves slamming the beaches and washing over the coastal road.

"The winds are making so many bad noises. We're just doing our best to stay calm," said Jenniflore Desrosiers as she huddled with her family in her fragile cinderblock home, which had sprung numerous leaks from pelting rain.

Haiti's civil protection office said a number of coastal towns partially flooded overnight. Landslides and downed trees on roads prevented movement in numerous areas. The few places that were on the electrical grid had apparently lost power, and cellphone service was spotty.

Haitian officials spent Monday trying to persuade shantytown residents to take advantage of shelters being set up, but many refused.

"If we lose our things we are not going to get them back!" said Toussaint Laine, an unemployed man who lives with his family in a shack in Tabarre, a suburb of Port-au-Prince, the capital.