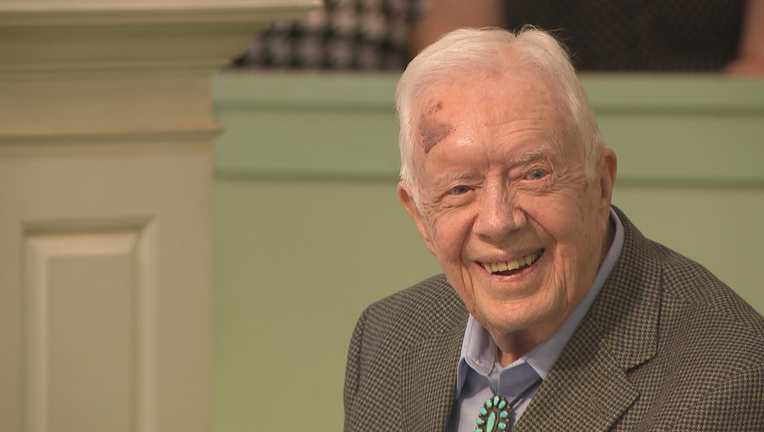 ATLANTA - Former President Jimmy Carter says that he is "disheartened, saddened, and angry" over the move to roll back voting access in his home state.

In a statement through the Carter Center, the former president argued that, while the security of elections should be safeguarded to prevent fraud, it should not "be at the expense of voters' access to the polls."

Carter's statements come after Georgia’s state Senate passed a bill in a vote that fell along party lines that would end no-excuse absentee voting after record turnout led to Democratic victories in the state’s presidential race and two U.S. Senate runoffs.

Senate Bill 241 would limit absentee voting to people 65 and older, those with a physical disability and people who will be out of town on Election Day — ending broad no-excuse absentee voting introduced by the Republican-led legislature in 2005. It would also require an ID for those who are able to vote absentee, among many other changes.

Georgia’s House has already passed a wide-ranging election bill backed by Republicans. The House bill would require a photo ID for absentee voting, limit the amount of time voters have to request an absentee ballot, restrict where ballot drop boxes could be located and when they could be accessed, and limit early voting hours on weekends.

Both bills are likely headed to a Senate-House conference committee where the chambers will hash out their difference on the issue - possibly leading to significant changes.

In response to the House and Senate bills passing, Carter pointed to the November election which officials say had no evidence of widespread voter fraud after a statewide audit, saying the results "should make us all proud."

"Now, as our state legislators seek to turn back the clock through legislation that will restrict access to voting for many Georgians, I am disheartened, saddened, and angry. Many of the proposed changes are reactions to allegations of fraud for which no evidence was produced—allegations that were, in fact, refuted through various audits, recounts, and other measures," Carter said. "The proposed changes appear to be rooted in partisan interests, not in the interests of all Georgia voters."

The former president also expressed his disappointment that the proposed changes referenced a report from a commission he helped co-chair in 2005, saying that vote-by-mail practices have "progressed significantly" in the 16 years since.

"In light of these advances, I believe that voting by mail can be conducted in a manner that ensures election integrity," Carter said. "This is just one of several ways to expand access to the voting process for voters across the state, regardless of political affiliation."

Republican Gov. Brian Kemp has endorsed the idea of requiring a photo ID for absentee voting but has yet to back any specific proposals. Republican Secretary of State Brad Raffensperger says he favors ending no-excuse absentee voting as well as requiring an ID for mail voting.