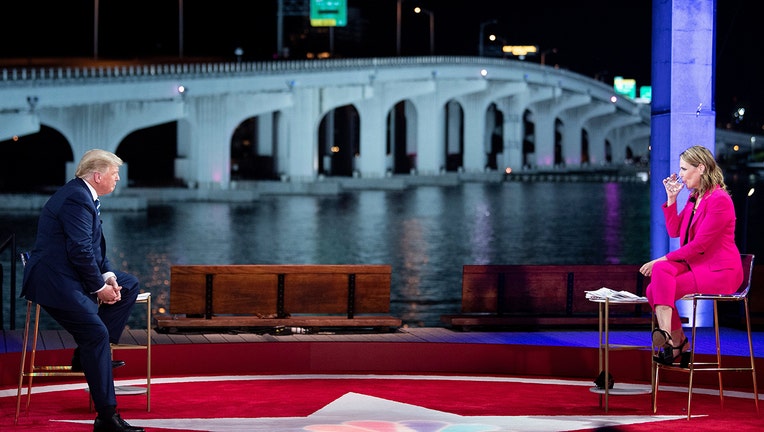 MIAMI, Fla. - President Donald Trump appeared on NBC from Miami Thursday for a town hall after backing out of plans for a virtual presidential faceoff following his COVID-19 diagnosis.

Savannah Guthrie hosted the event, during which the president discussed his recovery from the coronavirus, how he would react to election results, and when he last received a negative COVID-19 test result.

Trump, less than two weeks after being diagnosed with COVID-19, dodged directly answering whether he took a test the day of the first debate with former Vice President Joe Biden, Sept. 29, only saying “possibly I did, possibly I didn’t.”

Debate rules required that each candidate, using the honor system, had tested negative prior to the Cleveland event, but Trump did not give a date when asked when he last tested negative.

It was his positive test two days after the debate that created Thursday's simultaneous town halls on separate network TV stations; another campaign ritual changed by the pandemic that has rewritten the norms of society. Biden appeared on ABC with host George Stephanopoulos.

During the one-and-a-half-hour event, the president stopped short of condemning the conspiracy group QAnon, but instead said he would denounce white supremacy.

When asked if he would accept the results of the election, he said, "Yes, I will. But I want it to be an honest election, and so does everybody else.”

A final debate between the president and former vice president is still scheduled next week in Nashville.

FOX 13 News and the Associated Press contributed to this report.