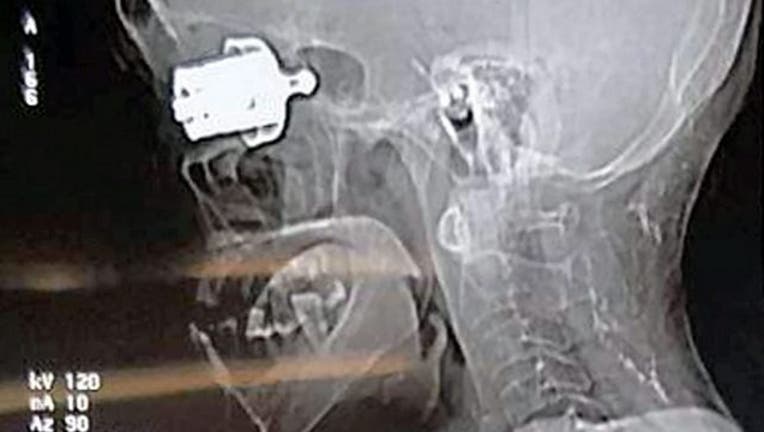 A scan shows the whistle lodged into the woman's skull. (SWNS)

FOX NEWS - An Indian woman is blinded in one eye after the whistle attached to a pressure cooker shot off the cooking device and lodged into her skull.

The horrific accident happened as Munda Birsi, 57, was making a meal with her pressure cooker on Sept. 4. She set the cooker on the gas stove in her home and went outside to cut hay, according to SWNS.

The woman, who could not hear the whistle screaming over the hay-cutter, went back inside roughly an hour later to remove the cooker from the stovetop. As she did, the steam reportedly caused the whistle to burst and shoot into her face. The nearly 3-inch object pierced “the skull bone separating her eyes from her brain,” per SWNS.

Birsi was rushed to a local hospital where a CT scan revealed the whistle was jammed into her skull near her brain. The object was lodged so deeply it was not fully visible from the outside, photos show.

To start, doctors had to “release adhesions around the whistle and ensure that no bleeding should occur while extricating the metallic object. We had kept backup plans if blood would spurt,” he said. "It was a bit difficult to pull out the whistle as vigorous maneuver would damage the surrounding tissues. We gently pulled the whistle and packed the wound opening with the gauze pieces.”

"The surgery was successful and we could save the life of woman, though her left eye could not be saved,” he added.

Birsi was released from the hospital on Saturday, a day after the operation to remove the whistle.

Stay updated on this story from FOX News