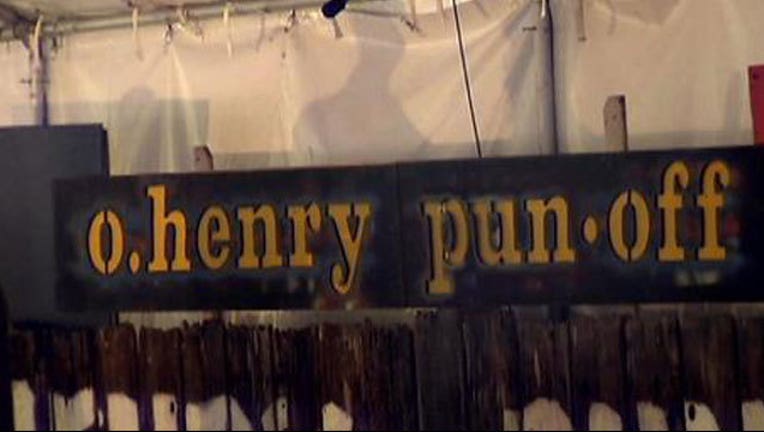 The best punslingers battled it out in Austin on Saturday.

Jerzy Gwiazdowski is a natural at making people laugh.

This is the third year he takes his pun to center stage.

"I first came here in 2012 as a rookie and ended up winning two of the three 1st place awards. So then I was stuck coming back as frequently as I can," says Jerzy Gwiazdowski, competitor.

The 38th annual Pun-Off World Championships took place on Saturday in the backyard of the O'Henry Museum, also known as Brush Square Park.

"Some people don't even know that the houses are down here. So it is a good way to draw attention to the two properties," Janice Gee, Brush Square Museums Foundation.

In order to be crowned king, competitors must throw skillfully crafted puns back-and-forth at each other, as well as spit out as many puns as possible in 90 seconds.

"You have to really bring people along with whatever weird stuff is happening in your own head, so they can take the ride with you. Or else, it's not accessible," says Gwiazdowski.

He began his career in Austin in 1884 with the publication of his own humorous newspaper, The Rolling Stone.

This event keeps his memory alive.

"The thing that people "boo" you for in your life, is something that they'll "cheer" you for here. So even if you don't win, it's worth coming here to be in a place where dumb word-play is celebrated," says Gwiazdowski.

The first world championship was held in 1977, people were welcomed with "lend us and ear and we'll give you more corn."

Now 38 years later, the puns continue to get better and better.

"Oh my gosh, these people are so creative and so funny," says Gee.

Competitors tell us the the puns are based on quantity, quality and clarity.

In the end, no matter who wins, these punslingers can be themselves.