Russian President Vladimir Putin on Sunday called the attack that damaged the huge bridge connecting Russia to its annexed territory of Crimea "a terrorist act" masterminded by Ukrainian special services.

The Kerch Bridge, which holds important strategic and symbolic value to Russia in its faltering war in Ukraine, was hit a day earlier by what Moscow has said was a truck bomb. Road and rail traffic on the bridge were temporarily halted, damaging a vital supply route for the Kremlin’s forces.

"There’s no doubt it was a terrorist act directed at the destruction of critically important civilian infrastructure of the Russian Federation," Putin said during a meeting with the chairman of Russia’s Investigative Committee, Alexander Bastrykin. "And the authors, perpetrators, and those who ordered it are the special services of Ukraine."

Bastrykin said Ukrainian special services and citizens of Russia and other countries took part in the attack. He said a criminal investigation had been launched into an act of terror. 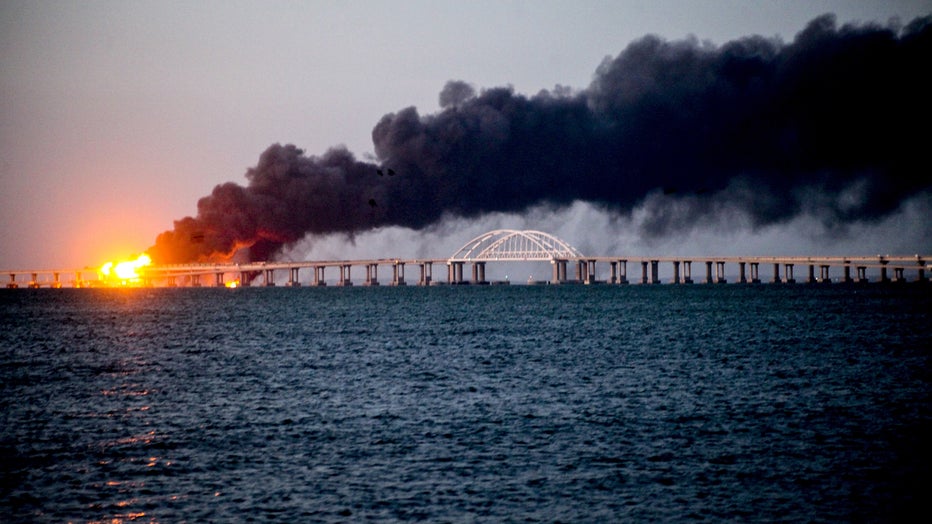 Explosion causes fire at the Kerch bridge in the Kerch Strait, Crimea on October 08, 2022. (Photo by Vera Katkova/Anadolu Agency via Getty Images)

"We have already established the route of the truck," he said, saying it had been to Bulgaria, Georgia, Armenia, North Ossetia and Krasnodar, a region in southern Russia.

"Putin accuses Ukraine of terrorism?" he said. "It has not even been 24 hours since Russian planes fired 12 rockets into a residential area of Zaporizhzhia, killing 13 people and injuring more than 50. No, there is only one state terrorist and the whole world knows who he is."

Podolyak referred to missile strikes on the city of Zaporizhzhia overnight that brought down part of a large apartment building. The six missiles were launched from Russian-occupied areas of the Zaporizhzhia region, the Ukrainian air force said.

READ MORE: Pope Francis implores Putin to 'stop this spiral of violence and death' in Ukraine

The region is one of four Russia claimed as its own this month, though its capital of the same name remains under Ukrainian control.

Russia has suffered a series of setbacks nearly eight months after invading Ukraine in a campaign many thought would be short-lived. In recent weeks, Ukrainian forces have staged a counteroffensive, retaking areas in the south and east, while Moscow's decision to call up more troops has led to protests and an exodus of hundreds of thousands of Russians.

"Again, Zaporizhzhia. Again, merciless attacks on civilians, targeting residential buildings, in the middle of the night," he wrote. At least 19 people died in Russian missile strikes on apartment buildings in the city on Thursday. 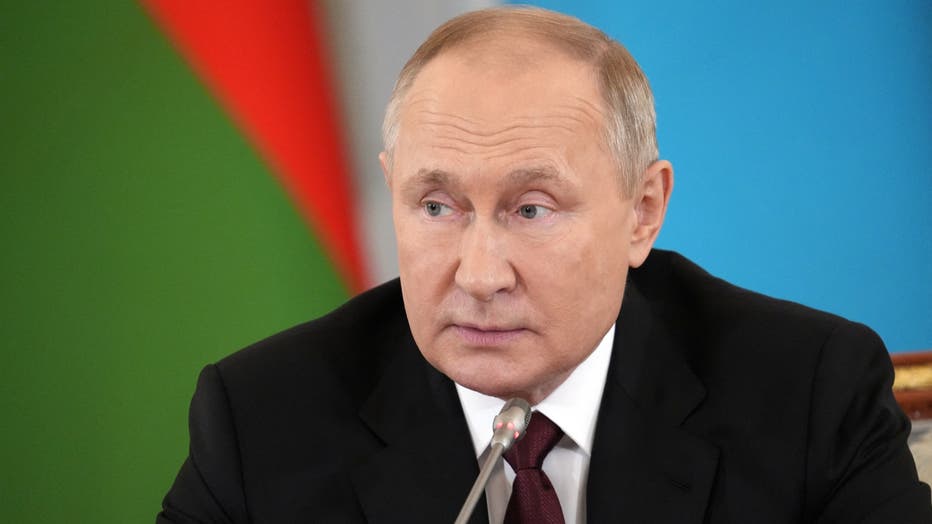 Russian President Vladimir Putin meets with leaders of the Commonwealth of Independent States (CIS) member states at the Konstantin Palace presidential residence in Strelna, outside Saint Petersburg, on October 7, 2022. (Photo by ALEXEY DANICHEV/SPUT

"From the one who gave this order, to everyone who carried out this order: They will answer," he added.

Ukrainian Foreign Minister Dmytro Kuleba called the attacks on civilians in Zaporizhzhia a war crime and urged an international investigation.

Stunned residents watched from behind police tape as emergency crews tried to reach the upper floors of a building that took a direct hit. A chasm at least 12 meters (40-feet) wide smoldered where apartments had once stood. In an adjacent apartment building, the missile barrage blew windows and doors out of their frames in a radius of hundreds of feet. At least 20 private homes and 50 apartment buildings were damaged, a local official said.

Regional police reported Sunday afternoon that 13 people had been killed and more than 60 wounded in the latest Zaporizhzhia attack, at least 10 of them children.

Tetyana Lazunko, 73, and her husband, Oleksii, took shelter in the hallway of their top-floor apartment after hearing air raid sirens. The explosion shook the building and sent their possessions flying. Lazunko wept as the couple surveyed the damage to their home of nearly five decades. 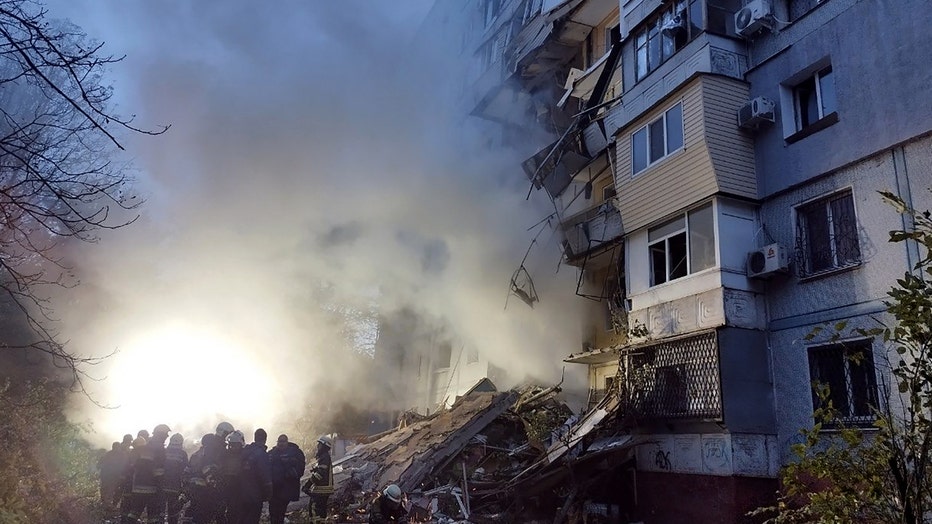 Rescuers gather past a residential building damaged after a strike in Zaporizhzhia, amid the Russian invasion of Ukraine on October 9, 2022. (Photo by MARYNA MOISEYENKO/AFP via Getty Images)

"Why are they bombing us? Why?" she said.

Others called the missile attack relentless.

"There was one explosion, then another one," 76-year-old Mucola Markovich said. In a flash, the fourth-floor apartment he shared with his wife was gone.

"When it will be rebuilt, I don’t know," Markovich said. "I am left without an apartment at the end of my life."

In another nearby neighborhood ravaged by a missile, three volunteers dug a shallow grave for a German shepherd killed in the strike.

Abbas Gallyamov, an independent Russian political analyst and a former speechwriter for Putin, said prior to his declaration that it was a terror attack, the Russian president had not responded forcefully enough to satisfy angry war hawks. The attack and response, he said, has "inspired the opposition, while the loyalists are demoralized."

"Because once again, they see that when the authorities say that everything is going according to plan and we’re winning, that they’re lying, and it demoralizes them," he said.

Putin personally opened the Kerch Bridge in May 2018 by driving a truck across it as a symbol of Moscow’s claims on Crimea. No one has claimed responsibility for damaging the 12-mile (19-kilometer) bridge, the longest in Europe. 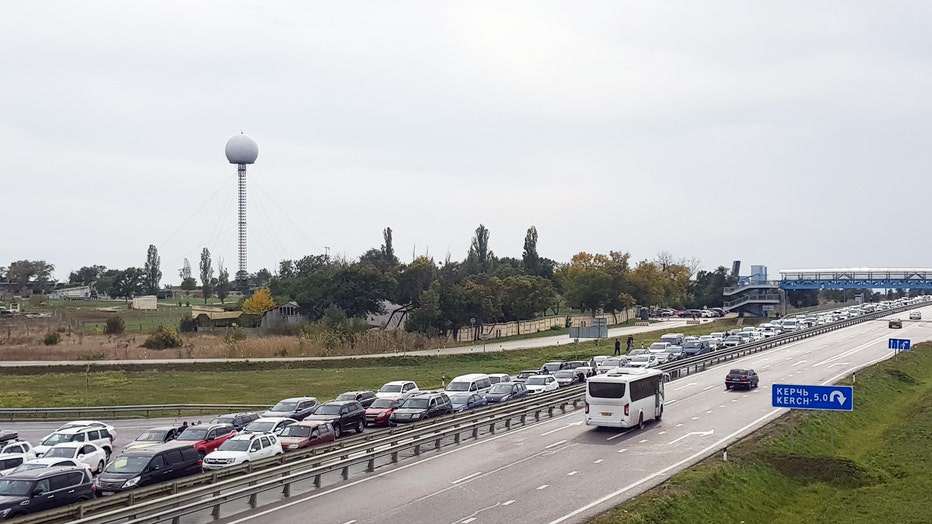 Vehicle wait to cross the Crimean bridge near Kerch, on October 9, 2022, a day after a bridge was hit by a blast. (Photo by ANNA KARPENKO/AFP via Getty Images)

Traffic over the bridge was temporarily suspended after the blast, but both automobiles and trains were crossing again on Sunday. Russia also restarted a car ferry service.

Crimea is a popular vacation resort for Russians and people trying to drive to the bridge and back onto the Russian mainland encountered hours-long traffic jams Sunday.

"We were a bit unprepared for such a turn," said one driver, Kirill Suslov, sitting in traffic. "That’s why the mood is a bit gloomy."

The Institute for the Study of War said videos of the bridge indicated that damage from the explosion "is likely to increase friction in Russian logistics for some time" but not cripple Russia’s ability to equip its troops in Ukraine.