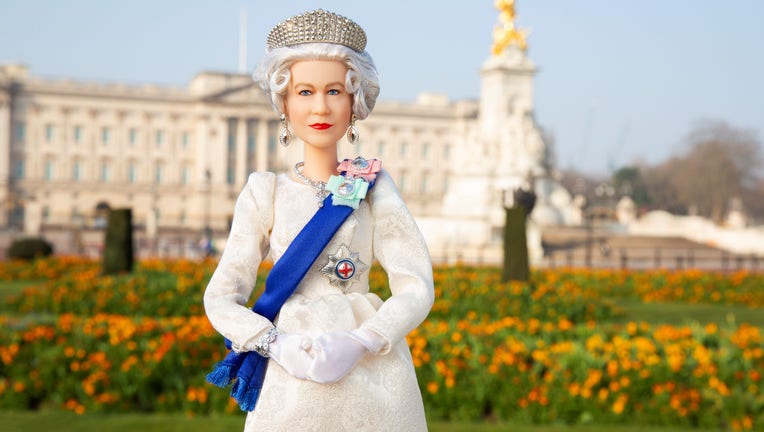 Queen Elizabeth II now has her own Barbie doll in honor of the monarch’s historic Platinum Jubilee, celebrating 70 years on the throne, and it was unveiled this week on her 96th birthday.

Mattel shared the tribute collection Barbie doll made in her likeness, recognizing the longest-reigning monarch in British history, on Thursday — which quickly appeared to be sold out online after it was unveiled.

The doll was inspired by her most iconic looks, wearing an ivory gown and blue ribbon adorned with little medallions representing the royal family orders. The ensemble is complete with a tiara that is based on Queen Mary's Fringe Tiara, which Queen Elizabeth II wore on her wedding day in 1947, and other matching accessories.

Mattel added that the packaging was inspired by Buckingham Palace, showing a hint of the throne and the red carpeting inside the palace throne room. It features a crest-shaped logo and a badge commemorating the 70th anniversary of the queen's coronation. The box also includes a certificate of authenticity and a doll stand inside to display the Queen Elizabeth II Barbie in regal poses.

Queen Elizabeth, who privately marked her 96th birthday on Thursday at the Sandringham estate in eastern England, has held a position that few women have.

"The longest-reigning British monarch, and the first to reach a Platinum Jubilee, The Queen has dedicated herself to service and duty and seen the world change immeasurably," historian and professor Kate Williams, author of "Our Queen Elizabeth," said in a statement.

Williams added that when Elizabeth ascended to the British throne in 1952 following the death of her father, women were not encouraged to work and politicians expressed doubts about "a young female monarch."

"But she showed them wrong, proved herself an adept leader and diplomat," Williams added.

In 1952, when she came to the throne, women were not encouraged to work and politicians expressed doubts about a young female monarch - but she showed them wrong, proved herself an adept leader and diplomat.

The Queen Elizabeth II Barbie doll became available Thursday on Amazon, Walmart and Target for $75 — though as of Thursday morning, all three websites appeared to be sold out.

Meanwhile, the real Elizabeth was expected to spend the day at the Sandringham estate’s Wood Farm cottage, a personal sanctuary where she also spent her first Christmas since Prince Philip’s death in April 2021. Philip loved the cottage, in part because it is close to the sea, she said in February when hosting a rare public event at Sandringham.

"I think the queen’s approach to birthdays very much embodies her ‘keep calm and carry on’ attitude," said Emily Nash, the royal editor at HELLO! magazine. "She doesn’t like a fuss."

While Thursday was set to be low-key, public celebrations for her Platinum Jubilee will take place June 2-5, when four days of jubilee festivities have been scheduled to coincide with the monarch’s official birthday.