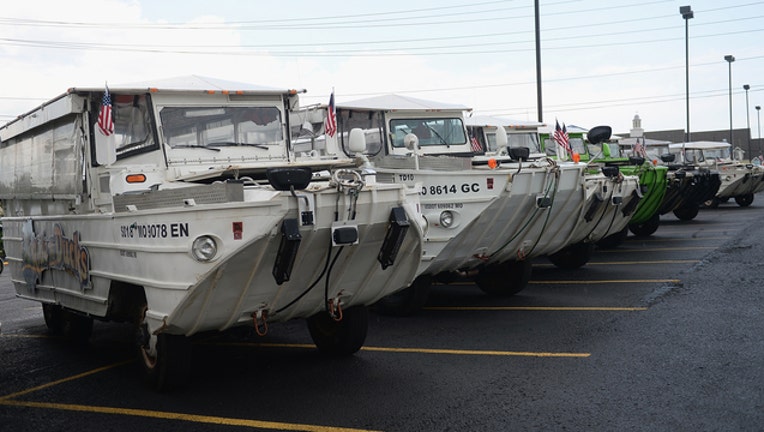 The fleet of the World War II DUKW boats are seen at Ride the Ducks in Branson, Missouri. (Photo by Michael Thomas/Getty Images)

BRANSON, Mo. (AP) -- Records show a water pump had been replaced with a less powerful system in a tourist duck boat that sank in a Missouri lake, killing 17 people.

The Kansas City Star reports that the original Higgins pump, which is capable of removing as much as 250 gallons of water per minute from the bottom of a boat, was replaced with two less powerful electric pumps in the boat that sank in July at Table Rock Lake in the Branson area.

The capacity of those two pumps wasn't clear. But Coast Guard duck boat inspection records show that other Higgins pumps have been replaced in recent years in other ducks boats, with the new pumps capable of extracting a combined 20 gallons of water or less per minute. That's not even one-tenth the pumping capacity of a Higgins, which was one of two pumping systems aboard the original World War II era duck boats.

One pumping system was for normal operations as the boats transported troops and equipment from ship to shore, while the Higgins was to keep the boats afloat in difficult conditions such as wind speeds of more than 15 mph or wave height of more than 3 feet. After the war, as the boats were converted for tourism, the Higgins pump was sometimes removed from duck boats so the vessels could be lengthened, or "stretched," to accommodate more passengers.

Issues arose when the sunken boat, dubbed Stretch Duck 07, faced near hurricane force winds. Investigators haven't determined whether the less powerful pumps played a role, although a malfunctioning pump was blamed for contributing to the 1999 sinking of the Miss Majestic duck boat in Lake Hamilton in Arkansas in which 13 died.

Stretch Duck 07's owner, Ripley Entertainment, said through spokeswoman Suzanne Smagala-Potts that the company can't comment on the pump because "the investigation and related litigation are ongoing."

Removing the Higgins pump is permitted, as long as there are two smaller pumps on the vessels. But the removal has raised questions among experts and attorneys because of the potential of duck boats to sink rapidly. A lawsuit filed by Missouri Attorney General Josh Hawley alleges that the company "did not conform to" federal safety recommendations by failing to replace the Higgins with a pump of equal or greater capacity.

Mary Schiavo, former inspector general for the U.S. Department of Transportation, said it makes no sense to remove the powerful bilge pump, but said duck boats are a "loophole craft" that doesn't fit neatly into any category because they are "so old and have been modified so much."

"The thing that struck me," Schiavo said of a video of the boat struggling in the water before it went down, "was it just kept getting lower and lower in the water as the water was coming over the sides. So I wondered if the bilge system was working, because if you're getting water over the sides of the boat and the bilges are working, you ought to be able to keep up. But it clearly wasn't."