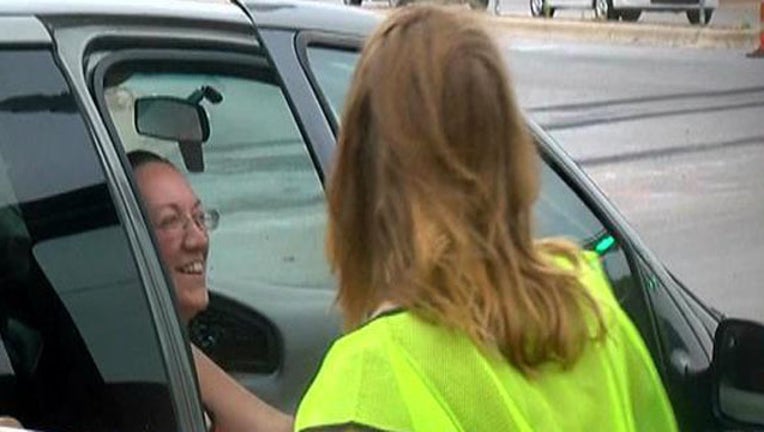 It was free donuts in Downtown Round Rock Friday morning. Some city workers passed them out to commuters for braving construction back-ups.

A 2-year, $13 million construction project is underway in Downtown Round Rock.

Construction brings more traffic congestion. But two Round Rock employees thought they could ease the pain with a sweet treat.

This is the second time Courtney Ainsworth and Kristin Brown have done their donut drop downtown.

The ladies paid for the donuts out of their own pockets. They used Round Rock Donuts to reward all the patient drivers.

"We know that nobody likes construction and congestion, so we just wanted to thank the folks who are coming to our downtown," said Courtney Ainsworth, Downtown Manager.

The city says the project aims to improve traffic flow and make downtown Round Rock more pedestrian friendly, something cyclists like Carla Johnson can appreciate.

"Right now I've biked about a mile and I'm kind of hungry so I need the carbs," said Johnson.

Ainsworth says the goal is to spread the spirit of sweetness to all those who drive Downtown Round Rock.

"I compare it to Pleasantville. Coming from the Washington metropolitan area one of the major difference I noticed is that the people here are very friendly," said Johnson.

"Things like this are just a way to put smiles on people's faces," said Ainsworth.

Proving the point, that sometimes showing a little kindness to a frustrated driver can go a long way

"I feel very blessed because we are a community and as a community we have to help each other," said Polo Garcia, Round Rock Donuts Store Manager.

Maybe Austin drivers could use a few donuts in rush-hour traffic.