Round Rock family mourns loss of toddler, urges drivers to slow down

The White family was gearing up for a soccer game at Old Settlers Park. Chris White said he let the boys hit the field first and then began applying sunblock to Allie. He turned around to grab another can of sunblock and in those few seconds, Allie was gone.

ROUND ROCK, Texas - Flowers and pictures of Allie White are placed throughout the White family’s living room, leftover from her funeral. The two-year-old was killed in an auto-pedestrian crash on September 29.

Allie’s father Chris describes it as the worst day of his life. The White family was gearing up for a soccer game at Old Settlers Park. Chris White said he let the boys hit the field first and then began applying sunblock to Allie. He turned around to grab another can of sunblock and in those few seconds, Allie was gone. She jumped off the curb, eager to join her brothers and was hit by a car. White said he reached for her but the driver kept going and ran over her.

White screamed and said he attempted to wave down the driver. An off-duty firefighter and an officer at the park rendered aid. White called 911 and then his wife Jamie with the heartbreaking news.

"When I got there I think she was already gone,” Jamie White said. “They would not let me near her because the scene was too devastating."

White said she began to pray and everyone else around her bowed their heads in prayer too but it was too late. Allie died on scene.

Round Rock police said no citations have been issued and the driver was cooperating with police. 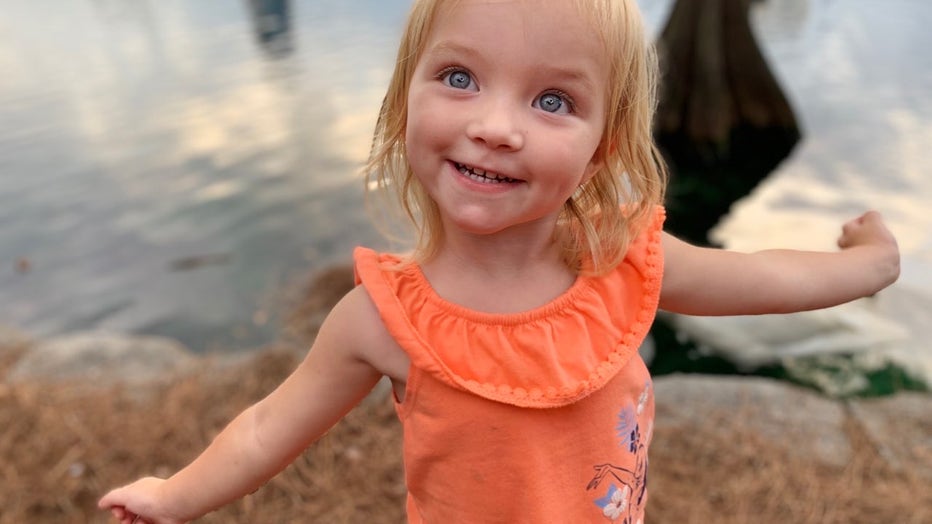 Two-year-old Allie White was struck and killed in an auto-pedestrian crash at Old Settlers Park in Round Rock in late September. (The White Family)

Witnesses tell the White family the driver was speeding and on her phone. RRPD said the driver voluntarily handed in her phone and the department is in the process of analyzing it.

Chris White said he was tortured for days thinking about, “what if’s.” What if he held onto her? What if the driver was paying closer attention? What if Allie’s death could serve as a reminder to slow down?

"It can happen to anyone, I never thought this would happen to us but it can happen to anyone," White said. "When you are driving in a crowded area especially where kids are usually present just slow down, phones should be put down regardless but slow down it's better to get there a minute later than take a chance. Also when you are with several children, taking them places be as safe as possible hold their hands."

Allie’s older sister Maddison spoke fondly of Allie calling her a daredevil who loved to swing off bar handles. White said the two were extremely close. She wanted to be like her big sister and she was her mother’s light.

"She was a godsend, she was the light of our life and really a complete godsend, she gave us light every single day," Jamie White said.

The White family is also looking at working with the city to add safety barriers in Old Settlers Park like speed bumps and signs to remind drivers to slow down. In hopes, Allie's story may be a guiding light.

"If something good can come out of this than Allie's passing is not in vain, we can save lots of other children's lives," said White.