A relentless assault on the Ukrainian port city of Mariupol continued Saturday, as Russian forces shelled the city's downtown, including an area around a mosque that was sheltering more than 80 people — some children.

Ukrainian President Volodymyr Zelenskyy said Russia is bombing Mariupol "24 hours a day." And as Russian units also fanned out to prepare for an assault on Ukraine's capital of Kyiv, Zelenskyy urged his people to continue their resistance, saying Russia would need to carpet-bomb Kyiv and kill its residents to take the city.

"They will come here only if they kill us all," Zelenskyy said. "If that is their goal, let them come." 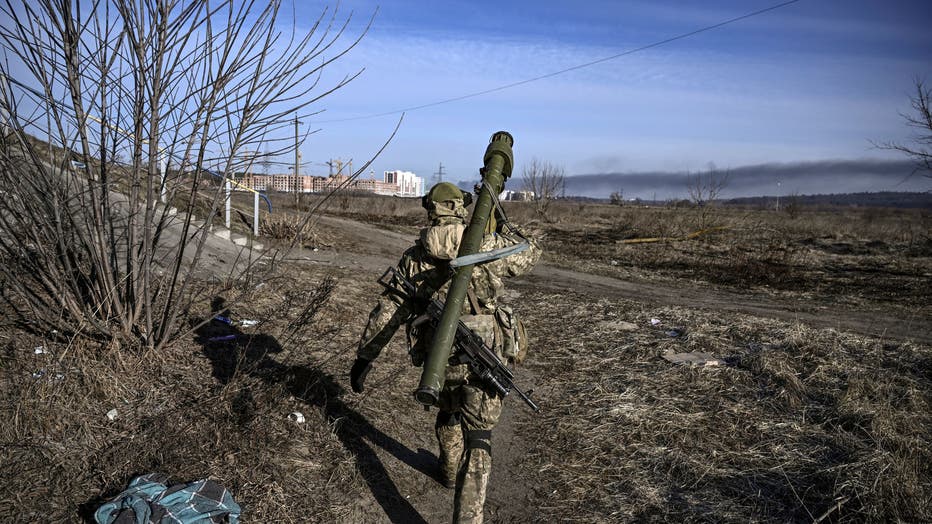 A Ukranian serviceman walks towards the front line in the city of Irpin, northern Ukraine, on March 12, 2022. - Russian forces are positioned around Kiev on March 12, 2022 and are "blocking" Mariupol, where thousands of people are suffering a devasta

Now in its third week, the war has expanded to areas in western Ukraine, closer to NATO members Poland and Romania. The war has forced more than 2.5 million people to flee Ukraine. The country's chief prosecutor’s office says at least 79 children have been killed since the invasion began on Feb. 24.

Here are some key things to know about the war:

Russian shelling of this Ukrainian port city of 430,000 has been relentless, and the mayor's office says more than 1,500 have died since the siege began. Russian forces hammered the city's downtown on Saturday, as residents hid.

The Ukrainian government said a mosque where people sought shelter in the city's center was shelled, but an unverified Instagram post by a man claiming to be the mosque association’s president said the mosque itself wasn't hit, but a bomb fell about 750 yards (700 meters) away. The Ukrainian Embassy in Turkey said 86 Turkish nationals, including 34 children, were among those who had sought safety in the mosque.

Repeated attempts to bring food to Mariupol and evacuate civilians have been cancelled due to ongoing Russian fire. Zelenskyy said Russian bombing has been constant, while Moscow accuses the Ukrainians of violating cease-fires. The unceasing shelling has even interrupted efforts to bury the dead in mass graves.

On Saturday, a Ukrainian official said Russian soldiers blocked one humanitarian convoy that was trying to reach Mariupol and stole from another. Doctors Without Borders said some residents are dying for lack of medication, with the city without drinking water or medicine for over a week now. The aid group says people are resorting to boiling water from the ground or extracted from heating pipes.

Ukraine’s military said Saturday that Russian forces captured Mariupol’s eastern outskirts. Taking Mariupol and other ports on the Azov Sea would be strategic for Russian President Vladimir Putin, as it could allow Russia to establish a land corridor to Crimea, which it seized from Ukraine in 2014.

An Associated Press journalist witnessed tanks firing on a 9-story apartment block in Mariupol and was among a group of medical workers who came under sniper fire on Friday. Conditions at a local hospital there were deteriorating, electricity was reserved for operating tables and the hallways were lined with people with nowhere else to go.

Anastasiya Erashova, wept and trembled as she held a sleeping child. Shelling had just killed her other child as well as her brother’s child. "No one was able to save them," she said.

In Irpin, on the northwest outskirts of Kyiv, bodies laid in the open in a park and on a street Saturday. Serhy Protsenko walked his neighborhood as explosions sounded.

"When I woke up in the morning, everything was covered in smoke, everything was dark. We don’t know who is shooting and where," he said. "We don’t have any radio or information."

Some residents huddled in a pitch-dark basement for shelter, unsure where they could go and how they would get food if they left. Others were on the move, toting luggage across planks to get over a waterway where a bridge had been damaged. Armed men carried one older man on a stretcher.

RELATED: List of Russian goods that are banned, boycotted in US

What else is happening on the ground in Ukraine?

In the northeast, Russian forces were blockading Kharkiv, Ukraine’s second-largest city, even as efforts have been made to create new humanitarian corridors around it and other urban centers.

Ukraine’s emergency services reported that the bodies of five people were pulled from an apartment building that was struck by shelling in Kharkiv, including two women, a man and two children.

In multiple areas around Kyiv, heavy artillery fire sent residents scurrying for shelter as air raid sirens wailed. An ammunition depot outside the city was shelled overnight, sending billowing black smoke into the sky, according to video provided by emergency workers.

Britain’s Defense Ministry said Russian ground forces that had been north of Kyiv for most of the war had edged to within 25 kilometers (15 miles) of the city center and spread out, likely to support an attempted encirclement.

Commercial satellite images appeared to capture artillery firing on residential areas that stood between the Russians and the Ukrainian capital. The images from Maxar Technologies showed muzzle flashes and smoke from big guns, as well as impact craters and burning homes in the town of Moschun, 33 kilometers (20.5 miles) from Kyiv, the company said.

RELATED: More US troops deployed to Europe amid Ukraine invasion

What are Putin, Zelenskyy and other world leaders saying?

The Kremlin said Putin laid out his demands for ending the war, including Ukraine’s demilitarization. Moscow has also demanded that Ukraine drop its bid to join NATO, adopt a neutral status and acknowledge Russian sovereignty over Crimea, among other things.

Zelenskyy also told Israeli Prime Minister Naftali Bennett that he would be open to meeting Putin in Jerusalem to discuss an end to the war, but that there would first have to be a cease-fire. Putin has ignored Zelenskyy's previous offers to talk.

U.S. President Joe Biden announced another $200 million in aid to Ukraine, with an additional $13 billion included in a bill that has passed the House and should pass the Senate within days.