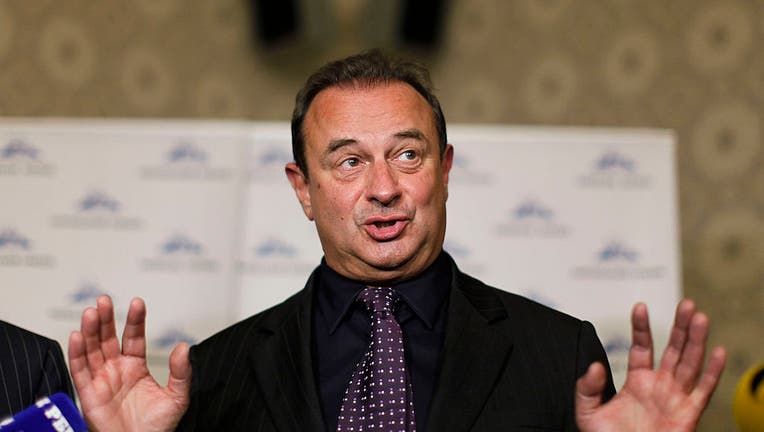 Vladimir Strzhalkovsky, chief executive officer of OAO GMK Norilsk Nickel, reacts while speaking to the media after an annual general meeting with shareholders at the President hotel in Moscow, Russia, on Friday, June 29, 2012. Photographer: Andrey R

NEW YORK - A Russian oligarch's superyacht is currently stuck at a dock in Norway because no one is willing to sell it any fuel.

According to National Public Radio, the 223-foot (68-meter) Ragnar is owned by Vladimir Strzhalkovsky, a former KGB agent with links to Russian President Vladimir Putin.

While many of Russia's oligarch-class of elites have seen their overseas assets seized or frozen as part of several rounds of sanctions targeted at punishing Putin and his close allies for the invasion of Ukraine, Strzhalkovsky is not currently on any sanctions list and the yacht's crew is not Russian, according to the report.

In a report by Norwegian public broadcaster NRK, the Malta-registered ship's captain says they simply cannot find any vendors willing to sell it any fuel to return home.

The boat's captain told NRK that he is being discriminated against and that Russian fishing boats can buy fuel and operate unhindered in Norwegian parts and waters.

NRK spoke with several supplies of fuel in Norway, none of whom said they wanted to deliver to the Ragnar.

"They can row home," one oil service said.

According to a profile in Boat International, the enormous boat can handle a helicopter landing on the deck and features amenities like "a BigBo amphibious ATV, heli-skiing equipment, four See-Doos, four ski scooters, six Seabobs, a multipurpose island, and a giant slide."