MOSCOW (AP) - Russian President Vladimir Putin on Monday signed a law allowing him to potentially hold onto power until 2036, a move that formalizes constitutional changes endorsed in a vote last year.

The July 1 constitutional vote included a provision that reset Putin's previous term limits, allowing him to run for president two more times. The change was rubber-stamped by the Kremlin-controlled legislature and the relevant law signed by Putin was posted Monday on an official portal of legal information.

The 68-year-old Russian president, who has been in power for more than two decades — longer than any other Kremlin leader since Soviet dictator Josef Stalin — said he would decide later whether to run again in 2024 when his current six-year term ends.

He has argued that resetting the term count was necessary to keep his lieutenants focused on their work instead of "darting their eyes in search for possible successors."

The opposition criticized the constitutional vote, arguing that it was tarnished by widespread reports of pressure on voters and other irregularities, as well as a lack of transparency and hurdles hindering independent monitoring. 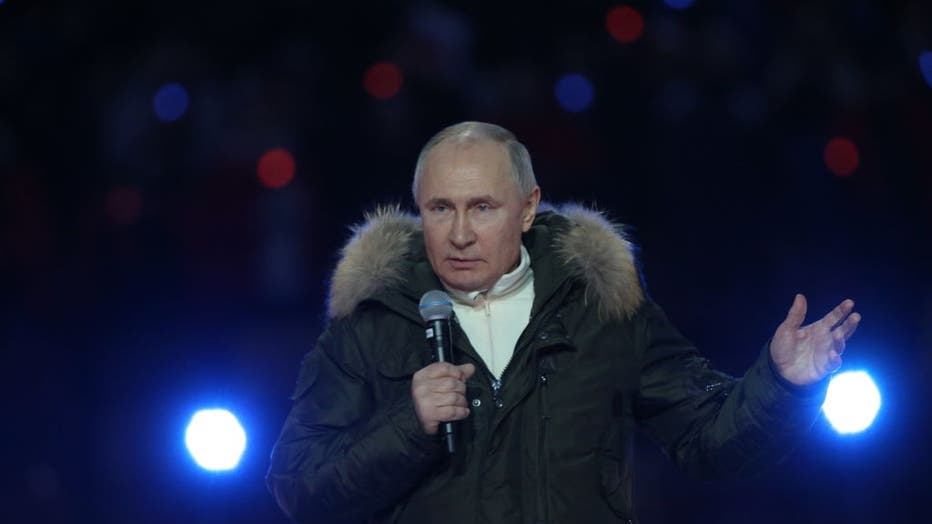 Russian President Vladimir Putin speaks during a concert marking the 7th anniversary of Crimea annexation, on March 18, 2021in Moscow, Russia.

In the months since the vote, Russia has imprisoned the country's most prominent opposition figure, Alexei Navalny,

The 44-year-old Navalny was arrested in January upon his return from Germany, where he spent five months recovering from a nerve-agent poisoning that he blames on the Kremlin. Russian authorities have rejected the accusation.

In February, Navalny was sentenced to 2 1/2 years in prison for violating the terms of his probation while convalescing in Germany. The sentence stems from a 2014 embezzlement conviction that Navalny has rejected as fabricated — and which the European Сourt of Human Rights has ruled to be unlawful.

RELATED: US and China spar in 1st face-to-face meeting under Biden administration

His team says Navalny had lost a substantial amount of weight even before he started a hunger strike Wednesday to protest authorities’ failure to provide proper treatment for his back and leg pains.

Navalny complained about prison officials’ refusal to give him the proper medications and to allow his doctor to visit him. He also protested the hourly checks a guard makes on him at night, saying they amount to sleep deprivation.

In an Instagram post Monday, Navalny said that three of 15 people in his room at the penal colony were diagnosed with tuberculosis. He noted that he had a strong cough and a fever of 38.1 Celsius (100.6 Fahrenheit).

Later on Monday, the newspaper Izvestia carried a statement from the state penitentiary service saying Navalny was moved to the prison colony's sanitary unit after a checkup found him having "signs of a respiratory illness, including a high fever."

In an acerbic note, Navalny said he and other inmates studied a notice on tuberculosis prevention that underlined the importance of strengthening immunity with a balanced diet — advice that contrasted with a prison ration of "glue-like porridge and frozen potatoes."