WASHINGTON - There are many dates to be aware of following the projected win of President-elect Joe Biden and before Inauguration Day on Jan. 20, 2021 — one of them being the “safe harbor” deadline on Dec. 8, 2020.

Americans spent several days following Election Day 2020 waiting for the race to be called. After it was finally projected by the Associated Press, FOX News and other major networks that Biden won, President Donald Trump refused to concede and instead has promised a barrage of lawsuits in states that narrowly voted for Biden.

Additionally, the Trump campaign requested a recount in Wisconsin, which Biden also added to his win column. In Georgia, the secretary of state announced that election officials would complete a recount after vote totals showed a razor-thin margin between Trump and Biden.

Given the ongoing legal action and lingering recounts, the “safe harbor” date becomes a notable step in the path to Inauguration Day.

Federal law (3 U.S. Code § 5) frees a state from further challenge if it settles legal disputes and certifies its results at least six days before the Electoral College meeting, which occurs this year on Dec. 14.

“Whatever final decision that state reached by (Dec. 8) — that’s conclusive and final and binding and nobody has any right to second guess it,” explained Adav Noti of Campaign Legal Center, a nonpartisan, nonprofit organization that focuses on voting rights, campaign finance, anti-gerrymandering work and government ethics.

Noti is the center’s senior director for trial litigation and chief of staff. He previously spent more than 10 years with the Federal Election Commission in a variety of capacities.

“It’s not a deadline in the sense that states don’t have to do that — states have until Dec. 14 to figure out who their members of the Electoral College are,” Noti added. “But if they do it at least six days in advance, they have this extra protection under federal law.” 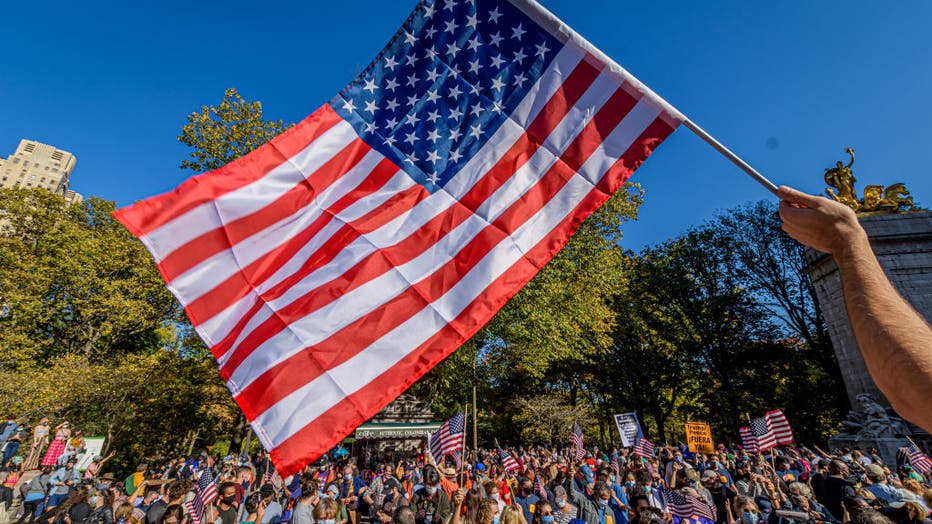 A participant holds a flag over the crowd of thousands celebrating the Biden-Harris projected victory on Nov. 7, 2020 in New York City (Photo by Erik McGregor/LightRocket via Getty Images)

At the state level, only Indiana, Iowa, Tennessee, Texas, Virginia specify deadlines for contests related to presidential electors, according to the National Conference of State Legislatures (NSCL). In most of the five states, the deadline to decide a contest is tied to the “Safe Harbor” deadline.

In Tennessee, contests for presidential electors must be decided before the last day of November. The rest don’t even specify a deadline in their state laws to conclude contests, according to the NCSL.

What if a state hasn’t resolved its disputes by the Dec. 8 “safe harbor” deadline?

If a state hasn’t resolved its legal disputes in the presidential election by Dec. 8, than it doesn’t get to take advantage of the extra protection in law.

“There are other protections in federal law that make sure that just because they go past Dec. 8, they don’t lose their right to decide who is representing the state in the Electoral College,” Noti said.

Noti added that there are other provisions in federal law that specify what happens if a state sends multiple slates of presidential electors to the Electoral College. “It doesn’t all hinge on the Dec. 8 date.”

The disputed election of 1876 between Rutherford B. Hayes and Democrat Samuel Tilden, in which multiple states in the South cast competing sets of electoral votes, led Congress to pass the Electoral Count Act of 1887 — encompassing the “safe harbor” provision so states could resolve their own disputes without Congress having to get involved.

If the deadline comes and goes and state officials submit conflicting electoral votes, Congress must agree on which to accept, according to the Congressional Research Service. If the U.S. Senate and House don’t agree, the votes certified by the state’s governor win.

Is it likely that legal disputes and recounts won’t be completed by Dec. 8?

Each state has its own laws and procedures for how it finalizes its result, and most of the deadlines are well in advance of Dec. 8, 2020.

“Even courts that generally take a long time to hear cases can deal with election cases within a matter of days,” he said.

“So there’s really no reason to think that the Dec. 8 date is going to present any difficulty, even in the states that are conducting recounts. There are timelines for those recounts, and they should all be resolved well in advance of Dec. 8.”