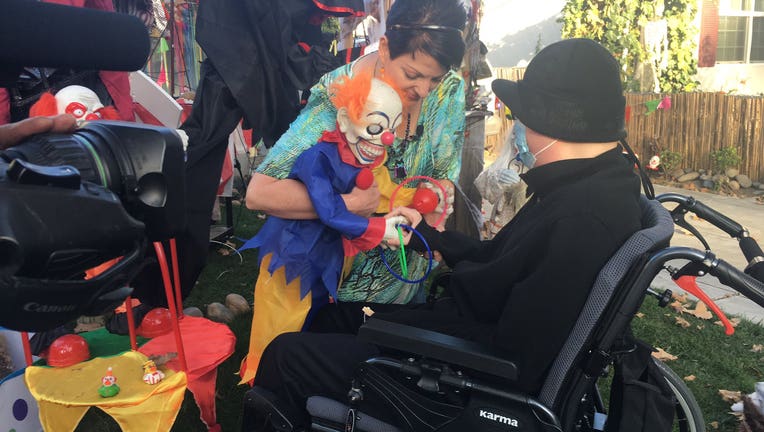 A mother has created an elaborate Halloween display at her San Jose home for her terminally-ill son.

SAN JOSE, Calif. - A San Jose family is attracting a lot of attention for an elaborate Halloween display in the front yard of their home. Shelly Jimenez said she built it in honor of her terminally ill son.

Jimenez called the display in front of her home in San Jose’s Willow Glen her evil Halloween carnival, but nothing about it is evil if you know why she built it.

“This is my way of bringing happiness to Christopher and his life and to share it with others in the community,” said Jimenez.

Jimenez gave birth to twins in 1995. They were born premature at 26 weeks. Her son Christopher has been sick his entire life with brain damage, cerebral palsy and now lung disease at the age of 24 is terminal.

“He could be fine one minute and then half an hour later he's in the ER with respiratory problems,” said Jimenez. “You just never know.”

Her son requires 24/7 care. The family is rarely able to leave their home and is not able to travel.

“To me this is like our annual vacation where I go all out and we get to celebrate the whole month,” said Jimenez.

The Jimenez family is causing quite a stir in one San Jose neighborhood, but it was a labor of love for a mother who created an elaborate Halloween display for her terminally-ill son.

Christopher Jimenez is able to touch the props. Shelly Jimenez made the display bright colors since her son is losing his sight.

“We don't really know how much he can see but he seems to really enjoy it,” said Sister Kayla Jimenez. “Just hearing the sounds and hearing other people laughing about it.”

Neighbors who stopped by said they love how the display brings the neighborhood together and admire the family's strength.

“Nothing is as scary than what they are going through and you cannot believe a parent's love for their child,” said Neighbor Molly Christensen.

“I have to think outside the box to bring joy and happiness to him,” said Jimenez.

Despite the family's long and hard journey, Jimenez’s message is simple. Life is too fragile to not get into the spirit of what you can celebrate.

“I just want everyone to feel loved and accepted and just spread kindness in this world,” said Jimenez.

Jimenez has been collecting props for the past three years. She has more than 40 props, many of them clowns and motion activated. It took her six weeks to build. The display is free and will be up through Halloween night.