Stacey Herrick runs a non-profit elderly dog retirement home out of her house in Philadelphia where some dogs whose owners have died of COVID-19 go to spend the rest of their days.

PHILADELPHIA - In the suburbs of Philadelphia, senior dogs looking for a forever home can find solace in a comfy couch with Stacey Herrick who runs Happy Tails Rescue Retirement Home.

Herrick who runs everything out of her own personal residence says she’s been working in animal rescue since 2004, helping dogs of all ages find homes and loving families. Her rescue partner moved across the country in 2016.

"It really wasn’t the same after she was gone," Herrick said. She wasn’t sure what direction she wanted to go in and took a break from the rescue she was working with when she had a realization.

Her own dogs were getting older and she said she recalled thinking, "What would happen if my current dogs as old as they are would end up in a shelter?" 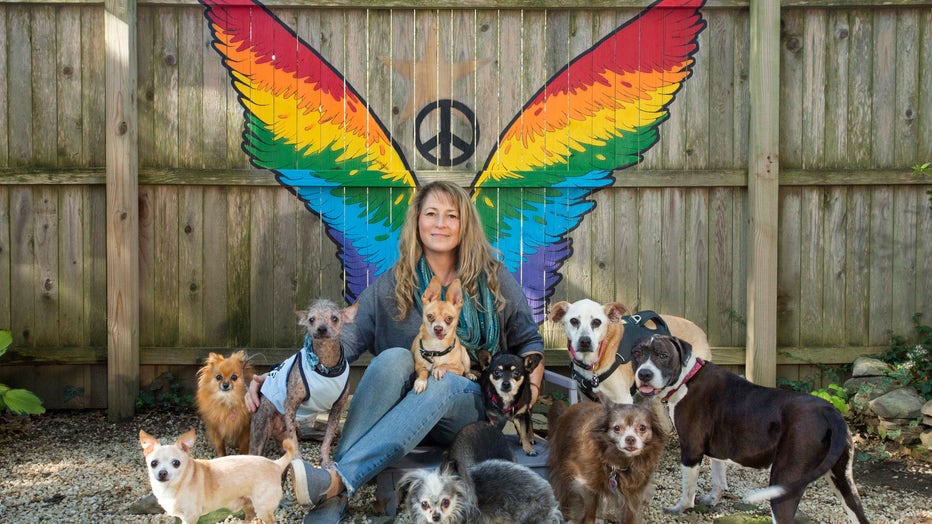 "It just made me so sad," Herrick said. She recalled previously working to get younger dogs adopted and noted all the older unwanted pooches.

Fewer people may have wanted to take them home, but the older dogs certainly have just as much love to give. "A lot of people weren’t interested in senior dogs at the time," Herrick said. "I just remember passing by them and said, ‘this is so heartbreaking.’"

She began taking in older dogs out of her own volition and immediately fell in love with them. That’s when she said she found her purpose.

She officially opened the elderly dog retirement home in 2019 when she applied for non-profit status, which allowed her to be supported by grants and donations. But her organization took a hit during the COVID-19 pandemic. She wasn’t able to hold fundraisers or allow much-needed volunteers to help care for the animals.

Several dogs found their way into Herrick’s loving home after their owners died of the novel coronavirus. All-in-all, the devastating situation was certainly a strain, but she and her faithful pooches made it through.

Many dogs have come to the retirement home with medical issues their previous owners were not prepared to handle. Many of the previous owners had requested the dogs be euthanized, but they’ve been able to spend the rest of their days in Herrick’s home.

Herrick does her best to care for all the dogs, but deaths are not uncommon. There have been times when a dog has stayed for less than 24 hours before sadly passing away.

Some of the current residents include 13-year-old Hoover, a Chinese Crested, whose only disability is being needy and awkward. But he can sing, and what he lacks in social skills, he makes up for in being adorable.

Hoover and Herrick met when a breeder who had 25 other Chinese Crested dogs became gravely ill and needed help finding homes for them. Herrick took Hoover and some of his siblings. She tried to find him another home but he was returned twice.

"He can be a little bit of a brat," Herrick said. "I did adopt him out twice and he came back twice, so I figured, well, that’s it — he’s staying with me."

Phatsy Cline and Flick Jagger are two dogs who who have their own rooms and are the unofficial heads of the household. Their owner died of COVID-19.

Herrick says it’s been a common occurrence this past year that people die of COVID-19 and their families are unable to care for the pets. Most of the dogs that have come to the retirement home would’ve been euthanized if Herrick wasn’t there for them.

For the most part, all of the dogs get along and in some cases, they fall in love.

In September, Herrick hosted a wedding for resident Chihuahuas Feliz and Machu Pichu, who bonded. She posted photos on social media with the groom wearing a tiny tuxedo and the bride wearing a dazzling white wedding dress. 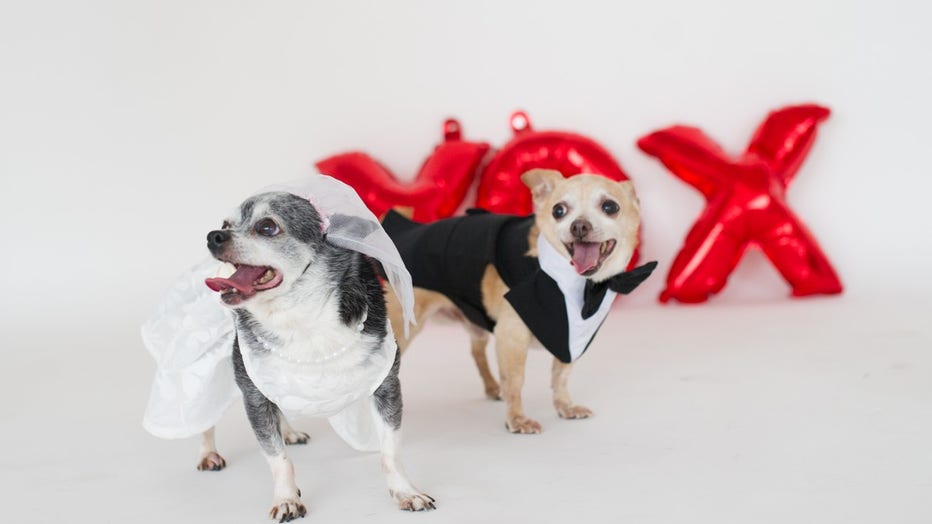 Bride Feliz and groom Machu Pichu, pose for their wedding.

While there have been times that some of the dogs get on each other's nerves for sitting in the wrong bed, their age gives them good energy, according to Herrick.

As much as she would like to care for every old dog who needs a home, she’s at her limit with about 19.

Herrick urges anyone looking to adopt to consider elderly dogs. She said they’re easy to deal with and "what you see is what you get."