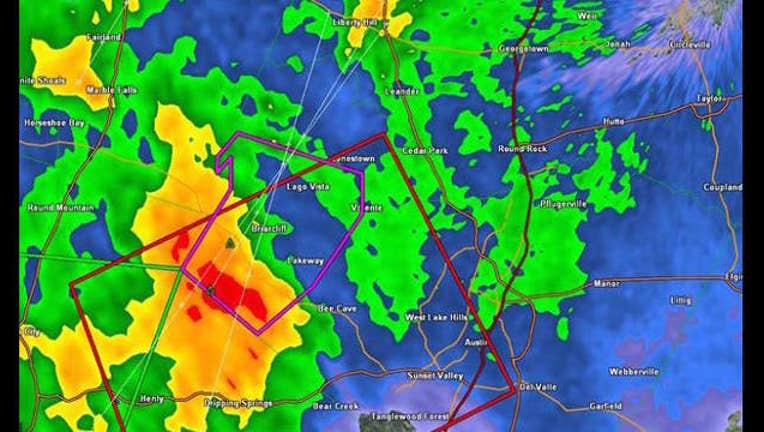 ATCEMS sending a third team to Wimberly/Blanco River to assist with water resq calls. 100 homes/businesses could be impacted.

More rain/storms moving in from the west so Blanco and Gillespie County under a FLASH FLOOD WARNING until 6:15am.

FLASH FLOOD EMERGENCY for Southern Hays County along the Blanco River around Wimberley. A devastating and life-threatening flood is occurring. If you live downstream of Wimberley on the Blanco River you need to seek higher ground now.

Rain continues to fall steadily throughout Central Texas. There are reports of widespread flash flooding occurring in Wimberley along the Blanco River. People on roofs.

Line of storms marching toward Rockdale, Giddings and La Grange. Get ready for damaging winds up to 70 mph with heavy rain that could lead to flash flooding. 8 - 12" of rain fell in a just few hours in Blanco County. Don't try to travel near Johnson City and Blanco. Pedernales River is alive again. It's above flood stage and so expect a rise on Lake Travis.

Anyone in need of shelter is encouraged to go to a shelter listed above or call 1-800-RED-CROSS.

Flash Flood Warning for Caldwell County until 12:15 am Sunday morning.

Flash Flood Warning for Gillespe until 12:30 am Sunday morning.

*UPDATE* Tornado Warning for Travis County has expired but that doesn't mean the severe weather is over.A Severe Thunderstorm Warning has been issued for Bastrop, Hays, Caldwell and Travis Counties until 10 p.m.

Meteorologist Zack Shields is giving updates both on air and online on Twitter.

While the tornado warning has expired, the severe weather threat continues. Winds are expected to pick up 50 - 60 mph.

Earlier Saturday, the continuous storms force officials at the University of Texas to postpone its graduation festivities.

Cities in northern Texas and southwestern Oklahoma are ordering some residents to evacuate amid warnings from the National Weather Service about potentially historic flooding.

A judge in Wichita Falls, Texas, near the Oklahoma border issued an order Saturday urging residents of the city and the surrounding county to evacuate if they live within a half-mile of either side of the Wichita River.

Evacuations also were ordered in Elk City in southwestern Oklahoma after torrential rain forced the closure of part of an interstate highway and threatened to flood homes. Elk City firefighter L.J. Geist said 4.5 inches of rain had fallen on the area that was already saturated by rainfall earlier in the week.

Several roads were impassable Saturday evening in Oklahoma City due to the rainfall.