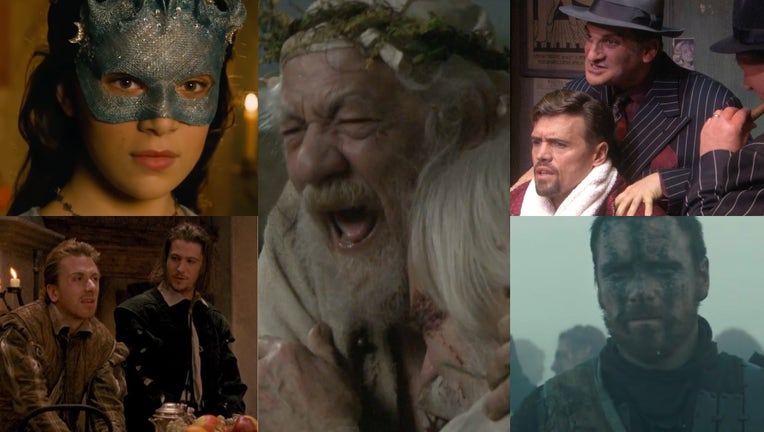 CHICAGO - Let’s face it, high schools everywhere have been doing William Shakespeare a disservice. The famed Bard wrote plays that were meant to be seen onstage, not read in a classroom. And as most Shakespeare enthusiasts will tell you, it’s only when his words are brought to life by talented actors that you can fully appreciate the humor, pathos and humanity of his work.

So in honor of Shakespeare’s 458th birthday on April 26th (or maybe April 23rd? It’s confusing), we’ve rounded up some filmed adaptations/riffs on his most famed works — all of which are streaming for free on Tubi. So pick a comedy or tragedy to get you started, and toast Big Willy on his birthday.

17 years after Leonardo DiCaprio and Claire Danes delivered the definitive 1990s take on "Romeo and Juliet," Hailee Steinfeld and Douglas Booth tried to do the same for the 2010s. The results are, well, a little mixed. While this adaptation doesn’t use Shakespeare’s original text (the script is by "Downton Abbey" scribe Julian Fellowes), it is set in Renaissance Verona, so that’s a "you win some, you lose some" for authenticity. Still, it’s a treat to watch a then-teenaged Hailee Steinfeld step out onto a balcony and into the leading lady phase of her career.

ALSO FREE ON TUBI: Orlando Bloom and Condola Rashad star in a 2013 Broadway production of "Romeo and Juliet"

Before Denzel Washington earned an Oscar nomination for playing Macbeth in Joel Coen’s 2021 adaptation, Michael Fassbender stepped into the role in this 2015 version from Australian director Justin Kurzel. The brutal tragedy follows a Scottish general whose life becomes a bit of a rollercoaster after a trio of witches prophesize that he’s going to become king. Though Kurzel’s "Macbeth" struggled at the box office, it earned praise from critics for its mesmerizing performances and unique cinematic flair. Come for Fassbender and Marion Cotillard as the ambitious Lord and Lady Macbeth, stay for the expertly-staged battle sequences.

Noted Shakespeare enthusiast Ian McKellen not only stars as the titular villain in this famed historical tragedy, he also co-wrote the adaptation as well. While the play tells the story of the tyrannical accession of a medieval king, this adaptation transports the action to 1930s Britain and reimagines Richard as a fascist plotting to usurp the throne. As McKellen himself put it, "When you put this amazing old story in a believable modern setting, it will hopefully raise the hair on the back of your neck, and you won't be able to dismiss it as 'just a movie' or, indeed, as 'just old-fashioned Shakespeare.'"

ALSO FREE ON TUBI: Ralph Fiennes directs and stars in a contemporary action-thriller take on "Coriolanus"

For yet another pairing of Ian McKellen and the Bard, check out this 2008 Royal Shakespeare Company television film of "King Lear," which began filming shortly after the production closed on stage. McKellen stars as Lear, the aging king struggling with how to divide his kingdom among his three daughters. This version combines theatrical and filmmaking conventions in intriguingly original ways. So give yourself the gift of watching one of our finest Shakespearean actors deliver the playwright’s iconic "Blow, winds" speech in a genuine torrential downpour.

ALSO FREE ON TUBI: Maxine Peake puts her own spin on "Hamlet" in this filmed stage production

Even by the standards of Elizabethan times, the gender politics of "The Taming of the Shrew" are rather questionable. So one of the best ways to experience that particular Shakespearean comedy (besides "10 Things I Hate About You," of course) is through this delightful 1940s Cole Porter musical. Filled with iconic songs like "Another Op'nin', Another Show," "Wunderbar," "Brush Up Your Shakespeare" and "Too Darn Hot," "Kiss Me, Kate" is set backstage at a musical version of "The Taming of the Shrew." There divorced couple Fred and Lilli must work through their own relationship issues while playing Petruchio and Katherine onstage. This particular revival was filmed live onstage in London, and features all the glitz and glam you could want from a classic Golden Age musical.

Rosencrantz and Guildenstern are Dead (1990)

And now for something completely different! Playwright Tom Stoppard turns Shakespeare’s canon on its head with this absurdist, tragicomic take on "Hamlet." Instead of following the titular Danish prince, this version revisits the events of the play through the eyes of two minor characters, the courtiers Rosencrantz and Guildenstern. Gary Oldman and Tim Roth play the eponymous roles in this film adaptation of Stoppard’s play, which Stoppard directed himself. ("Game of Thrones" star Iain Glen is also on hand as Hamlet.) For Shakespeare skeptics, this might be the perfect in-road to understanding the Bard — while poking a little fun at him too.

All the world’s a stage: More theater on Tubi

Staged (2020): We wouldn’t go so far as to call this David Tennant/Michael Sheen meta-comedy the only good "pandemic show," but it’s certainly one of the best — if only because it accurately captures the surreality of those early months better than any well-meaning drama ever could. Tennant and Sheen play fictionalized versions of themselves who are trying to rehearse a play over Zoom during lockdown. Prepare for a delightful parade of deadpan guest stars (Samuel L. Jackson! Dame Judi Dench!) and Tennant’s many headbands. So many headbands. Rated TV-MA. Two seasons streaming on Tubi. Also featuring Georgia Tennant, Anna Lundberg.