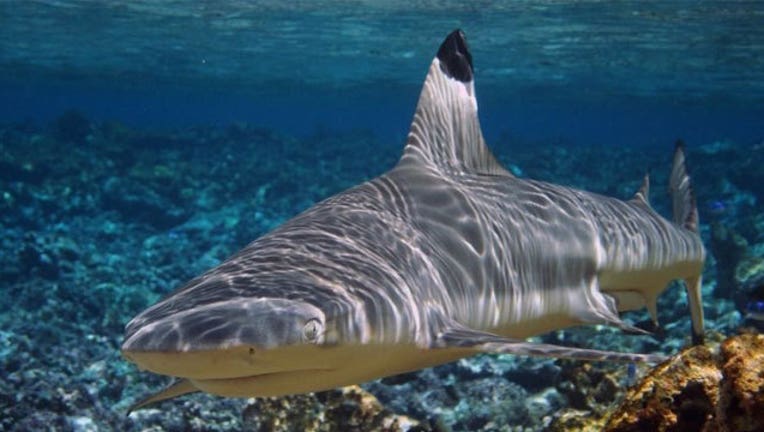 Blacktip reef sharks are common in the lagoons of the Palmyra Atoll in the Pacific Ocean. (Kydd Pollock)

If sharks at the Pacific atoll of Palmyra used Google Maps, they'd see a lot of red dashes for traffic between 7 and 8 o'clock every evening.

Shark traffic in and out of the lagoon at Palmyra Atoll, halfway between Hawaii and American Samoa, peaks during this hour, according to new research published in the Journal of Experimental Marine Biology and Ecology. The sharks travel through a deep channel dredged during World War II. Their numbers were counted using military sonar technology.

"Sharks are in trouble worldwide, so we need to be thinking about new tools and new technologies for studying them, and this one — which wasn't designed for scientific applications — worked very well," lead study author Douglas McCauley, a marine biologist at the University of California, Santa Barbara, said in a statement.

The researchers counted sharks swimming in and out of the lagoon with dual-frequency identification sonar, which uses sound waves to create images in dark, choppy water. It's a method roughly equivalent to the ultrasounds that let doctors peer inside the wombs of pregnant women.

Over the course of a month, McCauley and his team maintained their "sound gate" at the entrance to the lagoon, gathering 443 hours of observations and 1,196 total shark sightings. The highest number of sharks seen at one time was 10. Most were smaller species such as the blacktip shark (Carcharhinus limbatus), which is usually under 5 feet (1.5 meters) long.

The Palmyra Atoll is a shark paradise. According to the Nature Conservancy, the reefs surrounding the atoll represent a healthy marine environment, and one of the few places where sharks can be studied in natural population numbers. The atoll's waters are also home to sea turtles, reef fish and giant clams.

"Through this study, we also were able to confirm that large sharks do indeed transit into Palmyra's lagoons," marine biologist Paul DeSalles, a researcher in McCauley's lab, said in the statement. "The data allowed us to get a quantitative understanding of size classes and when these big sharks are using the channel."