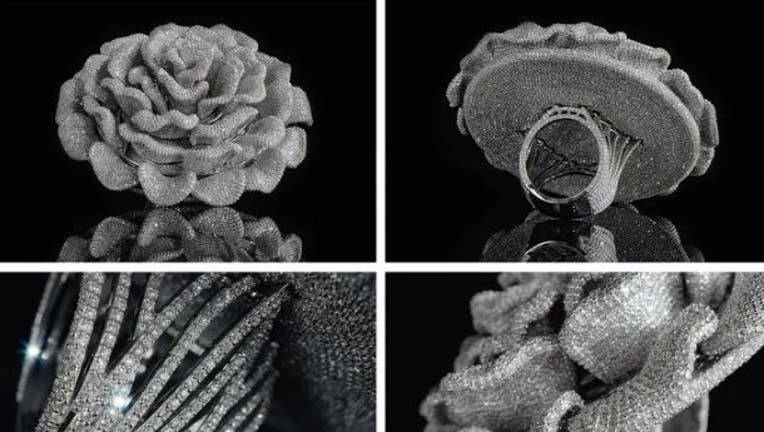 "The Touch of Ami" is a Guinness World Records-winning ring made by SWA Diamonds. The ring has 24,679 diamonds in it. (SWA Diamonds / Fox News)

A jeweler in India was recently recognized for creating a ring with the most diamonds.

SWA Diamonds, in Malappuram, India, made a ring with 24,679 diamonds — and was given the Guinness World Records title of "most diamonds set in one ring" in May, according to a recent announcement from Guinness.

THE WORLD’S THINNEST WATCH IS A $1.9 MILLION FERRARI

The ring’s design was inspired by pink oyster mushrooms, which represent eternity, according to a press release from SWA Diamonds.

The ring was also given a name — "The Touch of Ami" — the release noted.

''It is our privilege and honor that this ring was made in India and also the owner of the ring is an Indian," Abdul Gafur Anadiyan, SWA Diamonds’ managing director, said in the release.

"'The Touch of Ami' also marks the triumph of entrepreneurship in the diamond sector of our state,'' Anadiyan added.

"There is no greater joy than to live your dreams the way you were meant to," Anadiyan told Guinness in a statement.

"Our team feels accomplished and satisfied after knowing we have earned a new Guinness World Records title."

The ring was also noted in the Asian Book of Records, according to the SWA Diamonds press release.

GET UPDATES ON THIS STORY AT FOXBUSINESS.COM.