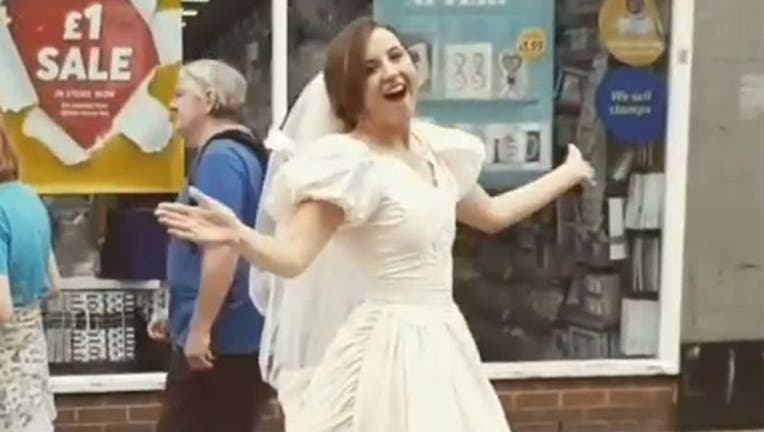 Michele Plum came up with the unusual idea of effectively "marrying herself" after watching many friends settling down and seeing "​​​babies everywhere." (Kennedy News)

FOX NEWS - It’s her birthday and she’ll marry herself if she wants to.

A single mom rang in her 36th birthday in an unusual fashion – by wearing a wedding dress and tiara and celebrating making it “all this way without marrying anyone.”

Michele Plum of Horsham, West Sussex, England, sent out Facebook invitations to her friends and family announcing her plans for a wedding-themed birthday party after getting fed up seeing everyone around her getting married and having "babies everywhere."

“I’m 36 years old on 16th August this year and have made it all this way without marrying anyone! Well done me!” the invitation begins, according to a screengrab of the Facebook page. “So, seeing as I have no intentions to do so for real (sorry Ben!), I want to have a wedding. That’s the best bit about marriage anyway, right?”

The woman went on to demand her guests put the date on their calendars, threatening to go “full Bridezilla” if they didn’t show up, and requested that everyone wear their best “bridesmaids dresses, your own wedding dress, cheesy suit, or as Elvis.”

The party plan was hatched after Plum said she saw another woman host a wedding-themed birthday a couple of years ago.

“I thought that was brilliant and so funny,” she told Metro.

“I became a single mom in my early twenties. I’ve done all the hard parenting stuff and now I’m free. My life’s brilliant. I have no intention of settling down,” she added.

Though the mom-of-one does not plan to get married, she still wanted to celebrate with the gown and the reception.

“When I go a wedding now, I just love the dress and the fact they get a big party,” she told Metro. “That’s the bit about marriage I like – not the having to live with somebody for the rest of my life bit.”

To plan her over-the-top bridal birthday, Plum said she went to a thrift shop in her town to find the “cheesiest option.”

“I bought my dress from the St Catherine’s Hospice shop in Horsham," she said. "They’ve devoted the whole upstairs to bridal dresses."

“I tore one of the bags open and gasped. That was it – it was the one. It’s very pale pink, has all these sequins on and my friend said I look like Ariel from The Little Mermaid when she gets married at the end,” she said of her purchase.

Plum said she hosted the birthday to be funny, but she was also trying to set a good example for her daughter.

“The message behind this is that I’m independent and strong. I’ve tried to teach my daughter that she doesn’t need a partner if she doesn’t want one,” she said to Metro. “With hard work, enjoying life and having good friends and family, you don’t need to be dependent on someone else.”

Plum isn’t completely ruling out the possibility of marriage in the future – especially after finding her perfect dress.

“I’ll be wearing [the dress] again at every possible opportunity – I might get it out for Halloween and you never know, if I ever do get married, I might wear it for that,” she said.