The agency said the mysterious image is really the result of a head-on collision between two galaxies.

Asteroid Apophis, which was believed to be on a potential collision course for Earth, is no longer going to be an issue for our big blue planet for another 100 years, scientists say.

It was believed that by 2068, Apophis’ flyby rocks could impact Earth due to the Yarkovsky effect.

The Yarkovsky effect, or Yarkovsky acceleration, is caused by the sun heating the space rock unevenly, resulting in a "process that slightly changes the orbit of the asteroid," according to NASA.

However, a new radar observation campaign combined with precise orbit analysis has shown that Apophis won’t be making contact with us Earth-dwellers any time soon. 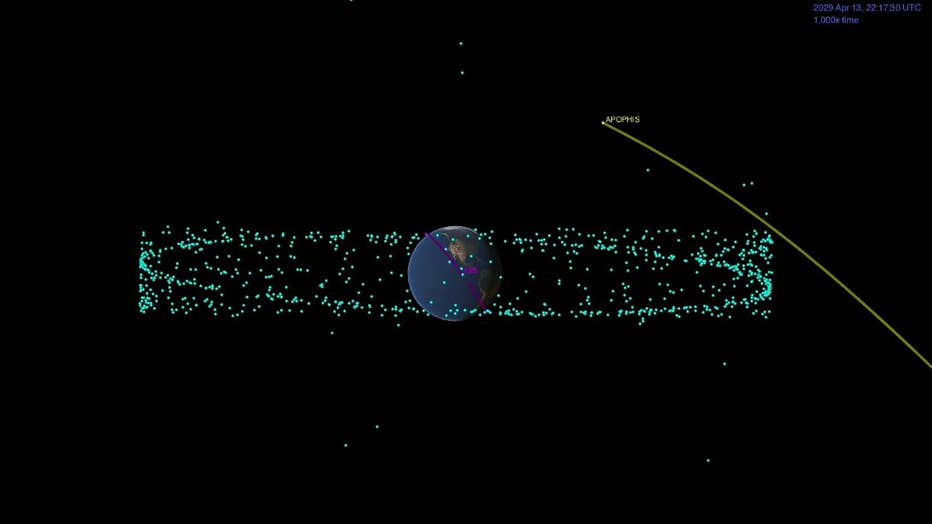 NASA rendering of Apophis asteroid passing by Earth in 2029.

RELATED: Asteroid Apophis: Huge space rock to pass by Earth, even closer in 2029

"When Apophis made a distant flyby of Earth around March 5, astronomers took the opportunity to use powerful radar observations to refine the estimate of its orbit around the Sun with extreme precision, enabling them to confidently rule out any impact risk in 2068 and long after," according to NASA.

"A 2068 impact is not in the realm of possibility anymore, and our calculations don’t show any impact risk for at least the next 100 years," said Davide Farnocchia of NASA’s Center for Near-Earth Object Studies (CNEOS), which is managed by NASA’s Jet Propulsion Laboratory in Southern California.

"With the support of recent optical observations and additional radar observations, the uncertainty in Apophis’ orbit has collapsed from hundreds of kilometers to just a handful of kilometers when projected to 2029. This greatly improved knowledge of its position in 2029 provides more certainty of its future motion, so we can now remove Apophis from the risk list," Farnocchia added.

Scientists predict that by April 13, 2029, Apophis is going to pass by so close to Earth that people will be able to look up into the sky and see the massive space rock without the aid of a telescope.

However, further observations are needed to determine the exact rotation rate and the axis the asteroid spins around to determine its trajectory.

"When I started working with asteroids after college, Apophis was the poster child for hazardous asteroids," said Farnocchia. "There’s a certain sense of satisfaction to see it removed from the risk list, and we’re looking forward to the science we might uncover during its close approach in 2029."