Austin Energy's solar program is not designed for customers to make money, but there is a payback.

AUSTIN, Texas - 14,400 Austin Energy customers have solar power collectors that feed into the utility. The homemade electricity isn’t sold to other communities but kept here, according to Tim Harvey with Austin Energy.

"So the energy that we produce locally is decreasing the amount of demand that we have on the ERCOT grid," said Harvey.

Along with the sites already online, Austin Energy has 1,300 solar locations in the works and 100 are currently waiting to be inspected before they can be plugged in. The wait time according to Austin Energy is 2 to 4 weeks.

Getting hooked up, for some residents, is taking much longer. FOX 7 Austin recently reported about the backlog with CenterPoint Energy.

Austin Energy also had a backlog.

"We were as high as six weeks at one point. Then we hired another inspector and brought on some temp inspectors and got that down. And so we try to manage that 2 to 3-week time period, but that's not always possible," said Harvey.

This partnership with Austin Energy isn't like royalty deals that landowners get with oil and gas companies. Austin Energy's solar program is not designed for customers to make money, but there is a payback.

As more solar panels are installed on homes and on commercial properties, the more credits Austin Energy gives out. This year residential sites have generated 93,000 kilowatts per hour and $9 million in credits. Commercial sites continue to lag behind, but the combined customer credits have grown by a million dollars since last year. 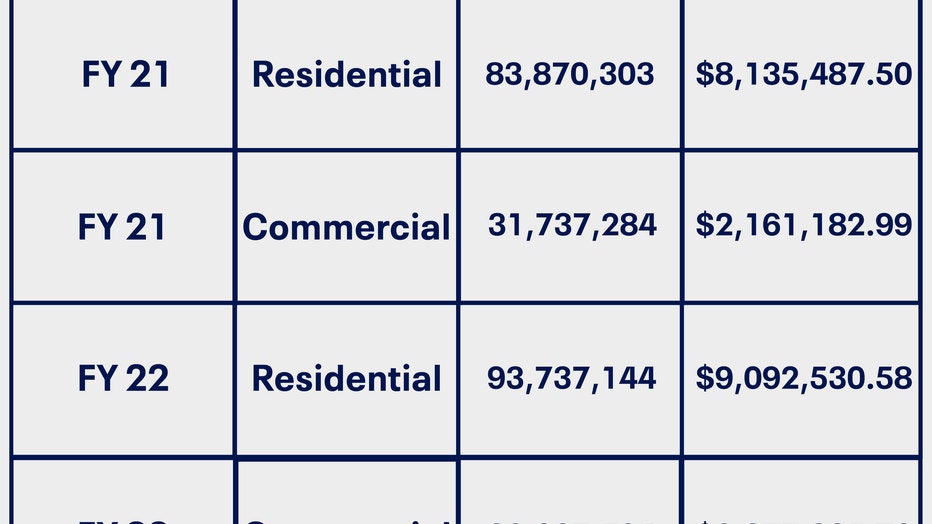 A table of the Austin Energy solar credits for fiscal years 2021 and 2022 for both residential and commercial customers.

"The utility needs to ensure that the power quality remains in certain thresholds so that it doesn't mess up your electrical equipment in your home or your neighbors. And so we don't want to see a dramatic amount of energy coming in from customers that's not meant to serve their load. If, you know, if we have to high of penetration and small areas, then that can start to affect the power quality. So as long as we kind of keep it to where we're not incentivizing the customer to oversize that that production, then we're going to be pretty good," said Harvey.

The cost of installing solar panels also has to be factored in. Depending on the size of a house, Harvey told FOX 7 Austin the price could be around $30,000. He encourage those interested in the idea to do their homework.

"This is a new thing for homeowners and they don't know about solar energy. And when they go out to try to buy a system, you know, the first person that they engage with might not be the most reputable and forth, forthright company. They could give them misinformation and sell them a system that's not going to produce well. So Austin Energy has an incentive, first of all, for customers who go through the education program. So it's like a half hour course that they take online. And then once they take that course, they're eligible for a $2,500 incentive. And the course gives them a lot of information about what to look for, you know, what to look out for and questions to ask your contractor, things like that and get and kind of sets their expectations for what it looks like to adopt solar," said Harvey.

Austin Energy is considering increasing the solar credit rate from 9.7 cents to almost 10 cents. The city council may consider it in November.

PEC has about 8,200 members with an active interconnect agreement that generate electricity for their use and to sell any excess back to PEC. All electricity that a member produces and consumes behind the meter (power that can be used on-site without passing through a meter) will continue to be treated as an offset to the cost of power purchased from PEC.