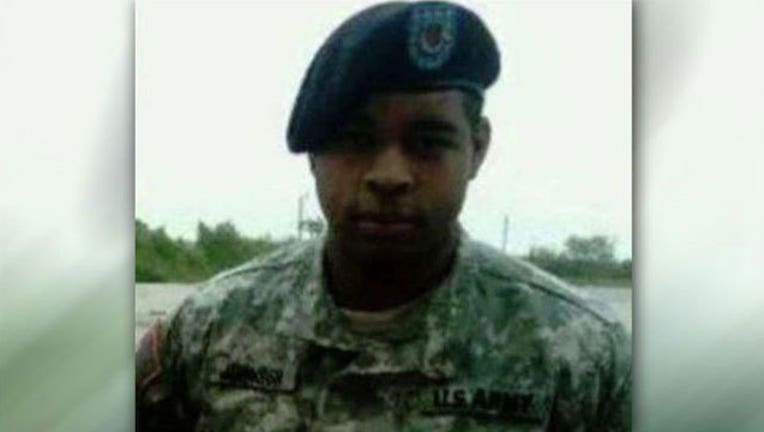 The Army reservist who killed five Dallas police officers last month showed symptoms of post-traumatic stress disorder after returning home from Afghanistan in 2014, but doctors concluded that he presented no serious risk to himself or others, according to newly released documents from the Veterans Health Administration.

Micah Johnson had sought treatment for anxiety, depression and hallucinations, telling doctors that he experienced nightmares after witnessing fellow soldiers getting blown in half. He also said he heard voices and mortars exploding, according to the documents obtained by The Associated Press under the Freedom of Information Act.

"I try to block those out, but it is kinda hard to forget," Johnson told his care provider, according to the documents.

Johnson, 25, was the sniper who targeted the officers at the conclusion of a peaceful march July 7 in downtown Dallas, where demonstrators were protesting fatal police shootings in Minnesota and Louisiana. Armed with an assault rifle, he took multiple positions as he fired. Hours later, authorities used a bomb-carrying robot to kill him.

During his deployment, Johnson was largely confined to base in an area of Afghanistan that had seen heavy combat but that was relatively quiet when his unit arrived in November 2013, according to his former squad leader.

Upon his return to the U.S. nine months later, Johnson told doctors he was experiencing panic attacks a few times a week, including once while at Wal-Mart, where there was an unspecified conflict that required a police response, the records said.

"Veteran states hearing all the noises, fights and police intervening caused him to have palpitations, 'My heart felt like someone was pinching it while it was beating fast,'" the records state. Johnson said he began shaking, felt short of breath and got chills following the Wal-Mart incident.

The records do not show that Johnson was formally diagnosed with PTSD.

The type of screening that he underwent is typically a first step to determine if the patient should be referred for further assessment to a mental health professional, said Joel Dvoskin, a clinical and forensic psychologist in Tucson, Arizona.

Doctors eventually decided that Johnson presented a low risk for suicide or for hurting anyone else.

Johnson was "not acutely at risk for harm to self or others," according to a medical record from a visit on Aug. 15, 2014. The patient was "not felt to be psychotic by presentation or by observation."

The reservist who specialized in carpentry and masonry told health care providers he had lower back pain and was avoiding "crowds of people and when in the public, scanning the area for danger, noting all the exits, watching everyone's actions."

"I feel like I can't trust all of these strangers around me," Johnson told his doctor, who noted that he had taken to drinking since his return to Dallas, consuming three to four shots of vodka up to three times a week. "It's hard for me to be around other people and I am so angry and irritable."

Records from the Aug. 15 visit state that Johnson described his childhood as "stressful." His responses to a section of the form titled "Sexual/Physical/Emotional Abuse History" were redacted. Johnson was also advised to talk with a health care worker about erectile dysfunction.

Johnson was prescribed a muscle relaxant, an antidepressant and anti-anxiety and sleep medication, and a nurse offered him tips on managing anger, records show.

He also saw a psychiatrist and was further evaluated for his PTSD symptoms in September of that year, but the physician noted that his mood was "better."

When providers called Johnson in October 2014, he requested to put off further assessment for PTSD, saying he was busy remodeling his mother's house, according to the records. He had previously told providers he planned to find a job in construction and that his long-term goal was to become a self-defense instructor.

Johnson's mother, Delphene Johnson, has said her son sought medical care from the VA for a back injury but got no help after filling out forms and going to meetings. He "just finally gave up," she told TheBlaze, a news site founded by conservative talk show host Glenn Beck.

In May 2014, new patients seeking mental health care at the Dallas VA faced a 50-day average wait, then the 10th longest in the nation.