'Spare Room', the boat stuck on Highway 71 for days, is now free

The 41-foot boat that has been stuck on the road since Sunday, July 11 is finally free.

Deputies with the Travis County Sheriff's Office are shutting down several lanes of SH 71, between Southwest Parkway and Bee Caves Road, to have the boat removed. One lane is currently open in each direction, according to TCSO. Lane closures will last several hours, drivers should find avoid the area and seek alternate routes.

The Bee Cave Police Department said in a Facebook post earlier this week that the weight of the boat would reportedly require two large cranes to be used and to shut down at least one lane of traffic. The police department also estimated the cost of removal at ten to fifteen thousand dollars.

According to the Bee Cave Police Department, the boat was being transported on a trailer when it became disabled in the 10500 block of Highway 71. The boat was partially on the state right of way and was not blocking traffic or creating an imminent danger, according to police.

"As we would with a passenger car which broke down in that location, we made sure they were not in the lane of traffic and allowed them time to arrange for the vehicle to be moved." Bee Cave PD said in a Facebook post. "We contacted the TXDOT Roadside Hero who stopped by and concurred the boat was not blocking or interfering with traffic.  As a matter of policy, TXDOT does not spend tax dollars removing vehicles from the right of way without allowing the owner the chance to remove it.  We also contacted the Texas Department of Public Safety who had a Trooper stop by the location and she concurred with our decision."

The Bee Cave Police Department said it made contact with a towing service to inquire about their ability to tow and store the boat. The weight of the boat would reportedly require two large cranes to be used and to shut down at least one lane of traffic at a cost of ten to fifteen thousand dollars.  A decision was made to allow the owner to work on the trailer and move the boat on his own. 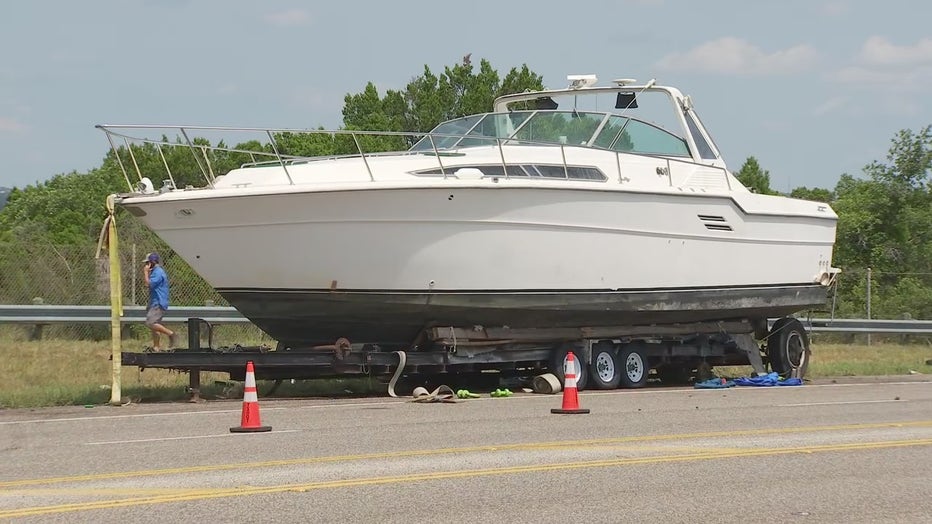 The boat has been stuck on the road since Sunday, July 11.

The owner attempted to move the boat last weekend and made it a short distance east on Highway 71 and again had issues with the trailer or wheels, according to police. The boat was off the roadway and once again, Bee Cave Officers and the TXDOT Roadside Hero determined there was no imminent danger or interference with traffic flow or safety.

Around 2:00 am on July 20, the owner moved the boat further east and had another breakdown.

The boat is once again off the lanes of traffic and TXDOT has placed a warning barricade as you approach.  The boat is now outside the Bee Cave city limits, according to police.

It appears that the never-ending nightmare for one has turned into a boatload of laughs for others on social media. A "Bee Cave Boat" Twitter account has surfaced online and has been sharing quirky tweets and videos throughout the week.