Nicholas Raad Bahri was arraigned Tuesday afternoon on homicide and other charges related to the execution-style murder of a 6-year-old boy, the boy's father, and the boy's father's girlfriend.

WARREN, Mich. (FOX 2) - The man suspected of an execution-style murder of a 6-year-old boy, the boy's father's girlfriend, and the boy's father who was found dead in a car in Detroit, was arraigned Tuesday afternoon.

Bahri is accused of shooting and killing Tai'raz Moore, 6, and Isis Rimson, 28, who were found dead in the basement of a Warren home on October 1. Both victims in Warren were shot execution-style and were found by Detroit Police who were at the home to notify them of the death of Tai'raz's father, Tukuyo.

"Nicholas Bahri. Barbarian. Child Killer. and he will serve his time," Dwyer said, holding up a photo of the suspect. "I have talked to U.S. attorney also, Mr. Schneider, Matthew Schneider. I've talked about this before as far as possibly taking this person under criminal capital offense. Mr. Schneider is monitoring the case very closely."

Dwyer said no other suspects are involved in the deaths and attributed "good, old-fashioned police work" that led detectives to the suspect but would not elaborate on any other details of the investigation just yet.

According to police, the crimes started when they were called to a burning car in Detroit around 2 a.m. on Oct. 1. Inside the burning car, which was a rented red Kia Sorrento, police found a body later identified as Tukuyo Moore.

After identifying him, Detroit Police drove to Warren and found the door open and evidence of a crime so they called Warren Police in to investigate and the bodies were discovered in the basement.

According to detectives, the home had been ransacked and drugs, guns, and a large amount of cash were all found hidden in the home by officers. Detectives said that Moore was involved in drug trafficking and kept large amounts of cash and drugs inside the home. Police also said he was engaged in the activities with Bahri.

During Tuesday's arraignment, detectives said Moore was last seen in the driveway of Bahri's home in Bloomfield Hills, which was determined based on cell phone records and security camera footage from Bahri's home.

According to detectives, that footage showed him in the Kia Sorrento which was later found burning in Detroit.

Around 10 p.m. that night, police said GPS data showed the rental drove around Oakland County before eventually arriving at the home on Otis in Warren and left 12 minutes later.

Five minutes after leaving the home on Otis, police said Bahri was seen pulling into a gas station at 8 Mile and Woodward in Detroit and buying a gas can and gasoline.

According to police, a security camera from Bahri's home showed him being dropped off by taxi early the next morning.

Just before 4 a.m., Bahri's internet history showed he was searching for expensive watches and Googled news reports about burning vehicles in Detroit.

"It was all about drugs and money. And I'll leave it at that," Dwyer said. 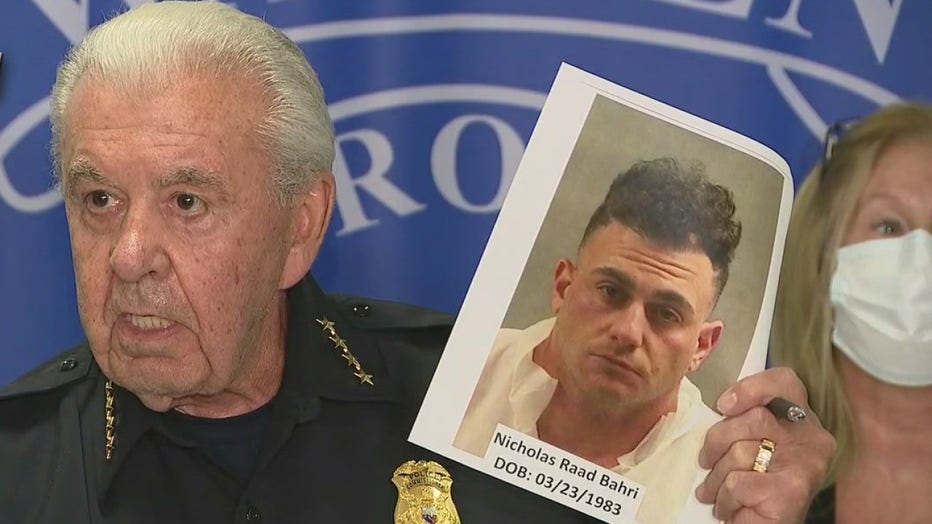 Warren Police Commissioner Bill Dwyer holds up a picture of Nicholas Bahir, the suspect in three murders including the execution-style murder of a 6-year-old boy.

During Tuesday's hearing, the judge in the case ordered Bahri held without bond and set his next court date for October 29.

Last week Dwyer called the murders truly evil and unthinkable and said the person or persons responsible clearly have no regard for life. Dwyer has said he wants federal prosecutors involved so the death penalty could be possible for the person responsible.

"When you murder of 6-year-old innocent baby, the person or persons responsible deserve the death penalty," Dwyer said Friday morning.