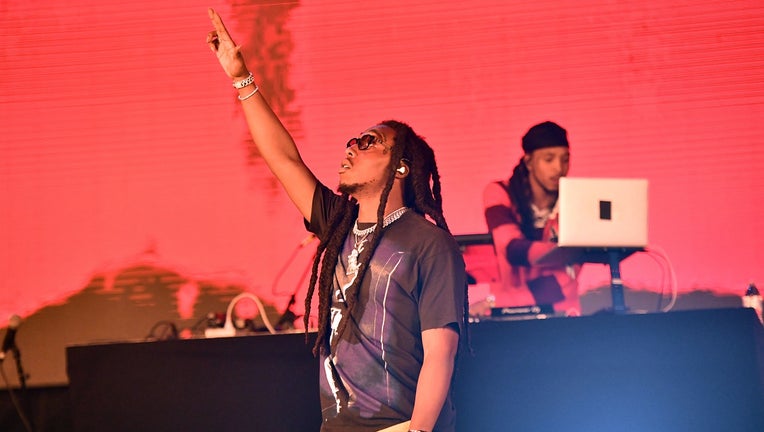 ATLANTA - A massive homegoing service is being planned for Friday at State Farm Arena for late Migos rapper Takeoff, according to his pastor.

The 28-year-old entertainer was killed around 2:30 a.m. Tuesday outside of 810 Billiards & Bowling in Houston following a private party. An autopsy report shows he was shot twice.

Rev. Jesse Curney, III of New Mercies Christian Church will be officiating the services, the pastor announced on V103 on Monday.

In a statement obtained by TMZ, Rev. Curney said, "I was really sad to hear the news. Kirshnik has been a faithful member since he was ten years old. He and his family were active and avid supporters of the church and the community as a whole."

Born Kirsnick Khari Ball, Takeoff grew up in suburban Atlanta -- Gwinnett County was less than flatteringly name-checked in a couple Migos tracks -- alongside the two other members of the group. Quavo was his uncle and Offset was his cousin, and the trio was raised in large part by Takeoff's mom.

Takeoff was the youngest of the three, and viewed as the most laidback member. He didn't appear in headlines at the rate of Offset, who is married to Cardi B, and he wasn't in high demand as a featured act on top 10 tracks like Quavo, who has guested on hits with Post Malone, DJ Khaled and Drake.

Fans were excited to hear Takeoff's new music that he and his uncle, Quavo, released just this week. Barring the potential of a posthumous album, "Messy" is the last song fans will hear Takeoff on.

State Farm Arena, which is home to the Atlanta Hawks, one of the many sports teams to honor the late rapper last week, seats about 20,000.

Details about how to attend have not been released, but the event is reportedly set for 1 p.m. Friday.