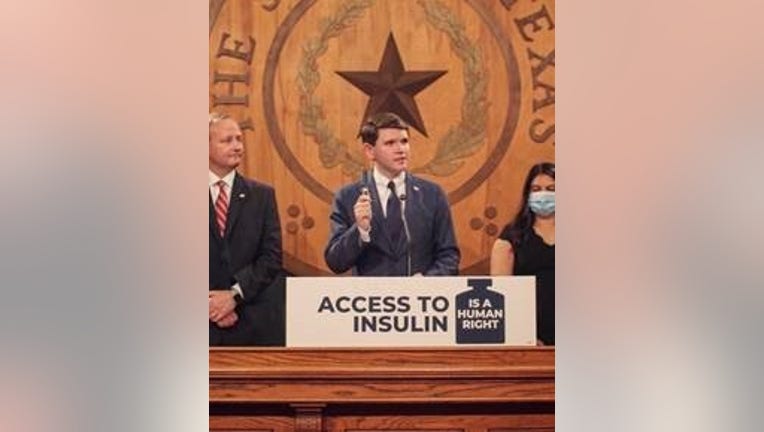 State Rep. James Talarico (D-Round Rock) revealed he almost died before being diagnosed with Type 1 diabetes in 2018 during a press conference announcing legislation to regulate out-of-pocket costs for insulin.

Joined by state Rep. Four Price (R-Amarillo), Talarico announced that HB 40 would cap the out-of-pocket costs for insulin at $50 a month. The bill would also require the Texas Attorney General to investigate rising insulin prices.

HB 40, according to Talarico's office, already has 38 Texas House Republicans and 64 Democrats signed on, a supermajority of the Texas House.

At the conference, Talarico spoke about his experience in May 2018 when he was 28 and running for the seat he now holds. He was hospitalized after a campaign event where he walked 25 miles across the length of his district.

In a lengthy Twitter thread, Talarico shared more about his experience, saying "halfway through the walk, I began feeling nauseous and fatigued. Before the town hall in Hutto, I vomited in the bathroom."

After his walk, he said he went to sleep but slept for a day and a half, so his parents rushed him to the hospital where his blood sugar was checked. "A normal blood glucose level is below 100," Talarico tweeted. "Mine was 900. I was immediately diagnosed with type 1 diabetes."

After testing his blood sugar, doctors found he was in diabetic ketoacidosis, a fatal condition that ends in coma and death without insulin. He fully recovered after 5 days in the ICU, and now successfully manages his new condition with a glucose monitor on his arm and shots of insulin every day. The next year, he completed another 25-mile walk across his district.

Even with health insurance, I paid $684 for my first 30-day supply of insulin—the medicine I need to live. I had to put it on a credit card," said Talarico in the press conference. "In the last 20 years, the price of insulin has skyrocketed 1200%. Today I introduced legislation to cap the price of insulin at $50 a month because access to insulin is a human right."

Further in the thread, Talarico outlined three primary reasons for the massive increase in price: the lack of competition, the monopolization by three companies of the global insulin market, and the fact there is no generic version of insulin.

In addition to HB 40, Talarico says he is co-authoring HB 18 with state Rep. Tom Oliverson (R-Cypress) which would make insulin available at a discounted rate for uninsured Texans.

Talarico says that if HB 40 passes, Texas would become the 16th state to cap the price of insulin, joining Washington, Utah, Colorado, New Mexico, Minnesota, Illinois, Kentucky, West Virginia, Virginia, New York, Maine, Vermont, New Hampshire, Massachusetts, and Delaware. He also says that Texas would also be the largest state to do so.