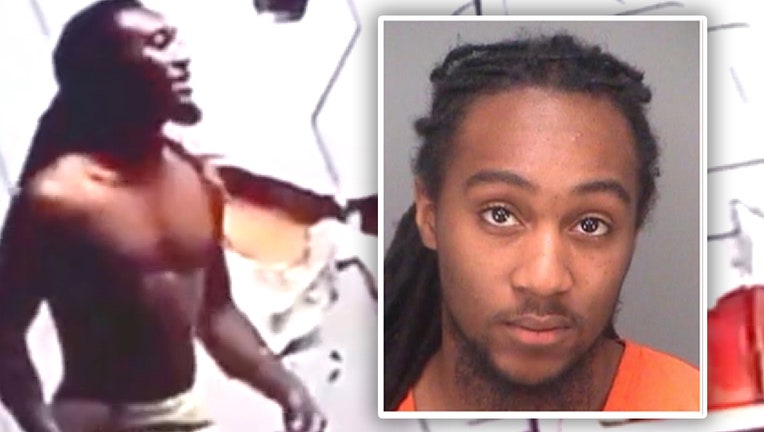 TAMPA, Fla. - A 20-year-old man pleaded guilty Tuesday for setting fire to a Tampa Champs Sports store during the unrest that followed protests over the death of George Floyd last year.

Terrence Hester Jr. faced a federal judge on arson charges and pleaded guilty Tuesday in court. Prosecutors said Hester was seen in video throwing a flammable object inside the Fowler Avenue store in the early morning hours of May 31, 2020. The footage showed the 20-year-old tossing a flaming piece of cloth through a broken window and into the store.

The fire caused $1.25 million, according to prosecutors.

The Champs store quickly went up in flames and was completely destroyed in the blaze. Other businesses in the plaza, including a Vietnamese restaurant next door, also suffered major damage.

From 2020: Suspect seen setting fire to Champs Sports in Tampa

Video shows a man throwing a flaming object into a broken window at Champs Sports. The business was destroyed in the blaze.

The video was publicly released as investigators began searching for a suspect. Hester was located and arrested in New York by July 2020.

The U.S. Attorney’s Office identified the man suspected of burning down the Champs Sports store in Tampa during a night of rioting.

Last summer, a state prosecutor in Tampa filed rioting and looting charges against dozens of people for ransacking stores, causing destruction, and fighting with police officers the same night as the Champs fire.

The Champs store was one of several businesses in the area that was damaged or looted following what had been a peaceful protest over the May 2020 death of Floyd, who died after a Minneapolis police officer pressed his knee against Floyd’s neck for several minutes. The trial for that officer began this week.

A federal judge will determine Hester’s sentence at a later date. He faces a minimum mandatory sentence of five years and up to 20 years in federal prison.