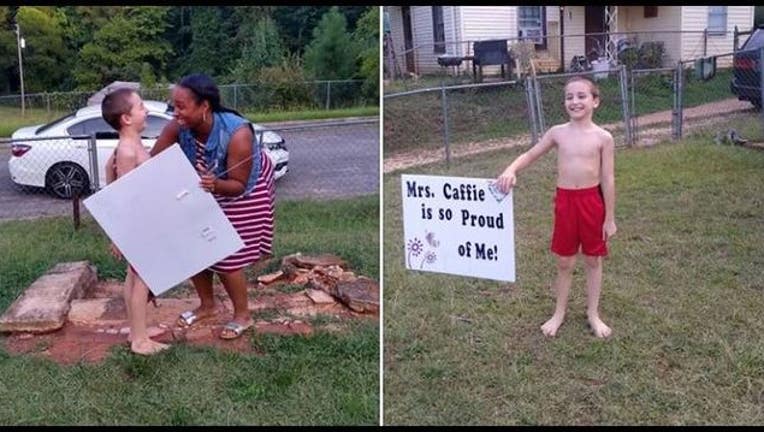 VALLEY, Alabama - Great educators are often underappreciated, and one Alabama family is grateful for the support of one.

Ashly McCarley took to social media on August 18 after receiving a surprise visit from her son Christopher's teacher. The post has since gone viral with over 19,000 likes and nearly 10,000 shares.

When Christopher earned a 100 on the first reading test of the year, his teacher Mrs. Caffie stopped by his home with a yard sign that said, "Mrs. Caffie is so proud of me!" McCarley says the thoughtful gesture made her son's day.

When the little scholar saw his teacher with the sign, his mother says he ran out of the house and jumped into her arms.

"I feel like Mrs. Caffie gives my son a fire to want to do his very best," she said.

"Other students have also gotten signs for their accomplishments also! I am not really sure what made his teacher decide to give signs other than trying to reward them in a special way that would also motivate them and others to do their very best," McCarley told FOX 26.

McCarley says she had many emotions when Mrs. Caffie showed up to her doorstep.

"I was so proud, and I was also overflowing with joy to see how happy my son was, because his teacher made a special trip to our home on a Sunday," McCarley said.

"To other educators out there, your impact on these children's lives is tremendous! It takes a very special individual to give their life over to teaching these children," McCarley said. "As a parent, I am very thankful for the ones who choose to be educators! When a person truly has a passion for teaching, they do it in such a way that they leave foot prints in our children's hearts."