Teen rewarded for turning in $135K found near ATM

Jose Nunez Romaniz, who studies criminal justice, was invited to apply for a job as a public safety officer in Albuquerque.

ALBUQUERQUE, N.M. - A teenager in New Mexico was just trying to buy his grandpa some socks when he stopped at an ATM and stumbled upon $135,000 laying on the ground. Now, he has a potential job offer.

José Nuñez Romaniz, 19, found the clear bag full of cash on Sunday near a Wells Fargo ATM in Albuquerque, according to KRQE-TV. He immediately called the 1-800 number on the ATM, as well as the police.

It turns out, the money was left behind by a Wells Fargo subcontractor, whose job is to fill the ATM. The worker had mistakenly left the cash there by accident.

Romaniz, who studies criminal justice at Central New Mexico Community College and hopes to pursue a career in law enforcement, said he knew he had to do the right thing after finding the money.

"In the back of my head, I was just thinking about my parents, especially my mom. What she would do if I came home with the money and what she would do with her chancla to hit me," Romaniz told the station. 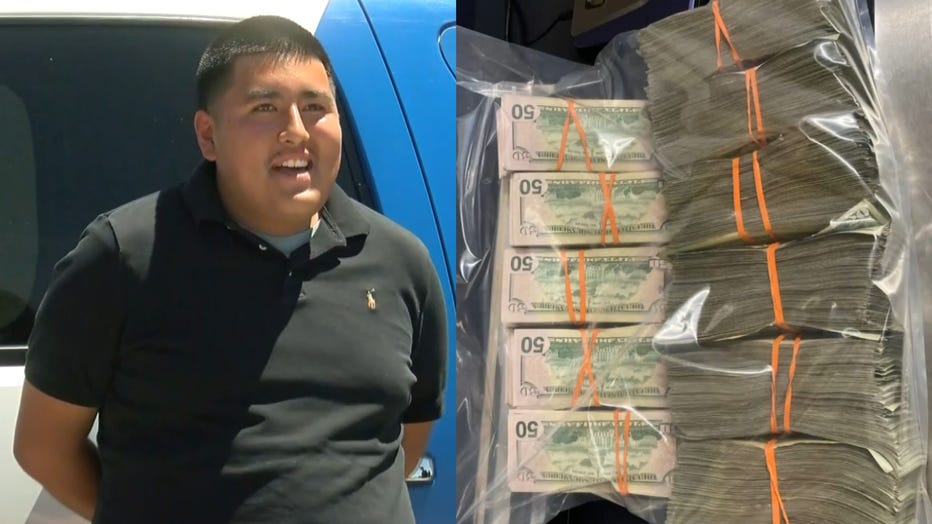 José Nuñez Romaniz, 19, is pictured, alongside a bag of $135,000 in cash he found near an ATM in Albuquerque, New Mexico. (Photo credit: KRQE-TV)

Romaniz was recognized this week by Albuquerque Police Chief Mike Geier and Mayor Tim Keller at the police academy for his good deed.

“What a great opportunity for us to see some good in the community. With all the tragedies we see with young people, this really restores our faith in the community as well,” Geier said Romaniz’s actions.

Geier told KRQE that the teen will be invited to apply for a job as a public safety officer while he's in school.

Romaniz was also presented with a $500 check from New Mexico electricity provider PNM, a gift card from a local restaurant, season tickets to the University of New Mexico Lobos football games and a signed football by former Chicago Bears linebacker Brian Urlacher from ESPN radio.

“I did the right thing and I know my parents are proud and my family is proud as well,” he added.