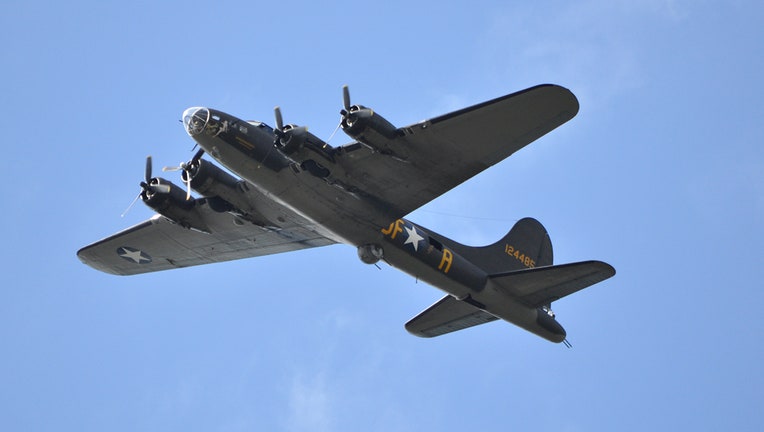 The restored movie version of the Memphis Belle flies over an airport in Tampa, Fla. (FOX photo)

Nearly 13,000 B-17 Flying Fortress bombers were built by the U.S. for World War II. After this weekend’s deadly crash at a Texas airshow, only nine of the historic planes remain airworthy.

Six people died in Saturday’s crash at the Commemorative Air Force’s Wings Over Dallas WWII Airshow. Footage from witnesses shows a vintage single-engine P-63 Kingcobra banking towards the B-17 ‘Texas Raiders’ and colliding with the bomber before both planes break apart and crash, bursting into flames after hitting the ground.

An investigation is underway to determine the cause of the crash, but it will be complicated by the fact that neither aircraft, because of their age, was carrying a flight data recorder, or ‘black box.’

Indeed, the age of the planes is part of their allure.

The Boeing B-17 was one of the primary heavy bombers built by the United States during World War II. The four-engine plane typically carried a crew of 10, several of whom manned gun turrets from the plane’s nose to its tail. The gunners’ job was to spot and shoot down enemy aircraft while the bomber completed its mission.

The B-17 dropped more bombs than any other type of plane in WWII and was primarily used in Europe, but did see action in the Pacific as well. The planes became known for their toughness and survivability, often bringing their crews home safely despite heavy damage.

The most famous B-17 may be the ‘Memphis Belle,’ flown by the first crew to complete the 25-mission goal set by the Army Air Corps. A 1990 movie dramatized the feat, and while the aircraft itself is being restored at the U.S. Air Force Museum, one of the few remaining B-17s tours the country painted with the Belle’s name and nose art. 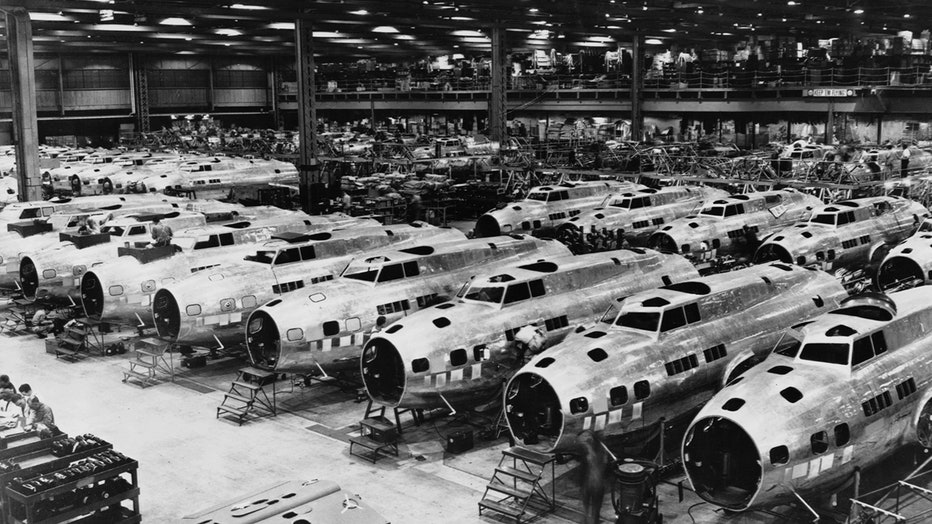 Rows of B-17 Flying Fortress heavy bombers are under production at a Boeing plant in Seattle, Washington. 1942-1945. (Photo by Library of Congress/Corbis/VCG via Getty Images)

Between 1937 and 1945, 12,731 B-17s were built. Roughly 4,735 were destroyed during World War II and while thousands of them continued to be used in various military and civilian applications around the world, most were eventually retired or destroyed.

Today, 45 B-17s survive in complete form, and of those, only nine are airworthy.

According to the Experimental Aircraft Association, the FAA, and data compiled by Wikipedia users, many of the non-flying B-17s are at museums around the world or are in various stages of restoration. Most are in the U.S. but a handful are in the U.K., France, and Brazil. Very few of them actually saw combat in WWII, having been produced too late to see action.

The 'Nine O Nine' carries 90-year-old Norbert Swierz on his first B-17 flight since he was shot down over Germany during WWII. There were no Nazis this time; instead, his family proudly cheered him on. Story by Jeremy Campbell originally aired February 11, 2011.

With so few B-17s still airworthy, the only place to see them in flight is usually at an airshow. Only about five or six of the airworthy B-17s are on tour at any given time.

Private organizations like the Commemorative Air Force use the planes as flying classrooms and often give rides to WWII veterans in an effort to keep history alive.

The restored movie version of the Memphis Belle fires up its engines in 2018. (FOX photo)

"The youngest ones are in their early 90s now," modern ‘Memphis Belle’ pilot Ray Fowler said in a 2013 interview.  "There's getting to be fewer and fewer of them to come out and share their stories."

In some cases, the high costs of operation and maintenance are offset by the sale of rides to private citizens. The rare experience goes for hundreds of dollars a seat, with the priciest usually being the bombardier’s seat in the plane’s iconic glass nose.

Flying aboard the 'Memphis Belle'

It's been years since B-17 bombers rumbled down the MacDill Air Force Base runways, so it was a special treat for airmen and their families when the ‘Memphis Belle’ herself returned. Story by Lloyd Sowers originally aired March 13, 2018.

After a 2011 ride aboard the restored B-17 ‘Aluminum Overcast,’ WWII B-17 tailgunner Foster Heath said he supported the idea of today’s Americans getting a chance to see the planes that helped beat the Nazis.

"They should know something about what went on during that war, as well as any other war," he offered.  "They should know what goes on and maybe be a little bit more vigilant and we won't have to have another one."