SAN ANTONIO, Texas - A bride in Texas caught a massive fish on the same day she said, "I do."

Eliot Granville, 34, of San Antonio, Texas, reeled in a black drum hours after she married Earnie Granville on May 22 in the city of Port Aransas.

After the ceremony – which Eliot Granville’s mom officiated – the newlyweds held a small reception for their guests at a nearby house where they and their immediate family were staying.

"It was perfect," Eliot Granville told Fox News Digital. "We had a great day."

As everyone was settling in for the night, Granville and her husband decided to go fishing at around 10 p.m.

Granville had changed out of her wedding gown and stepped into a white reception dress, which she wore to the fishing pier.

"It was kind of just like a last-minute thing that we decided to do," Granville said of the impromptu fishing adventure.

For the first 45 minutes of fishing, the fish kept taking Granville's bait and leaving. Finally, she felt a tug on her line and she went into action, she said.

"I set the hook, and then I started reeling it in," Granville said. "At first I thought that maybe I was stuck on something on the bottom because the fish was so large – I’ve never caught a fish that large."

"And then I realized that there was actually a fish on there," she added. 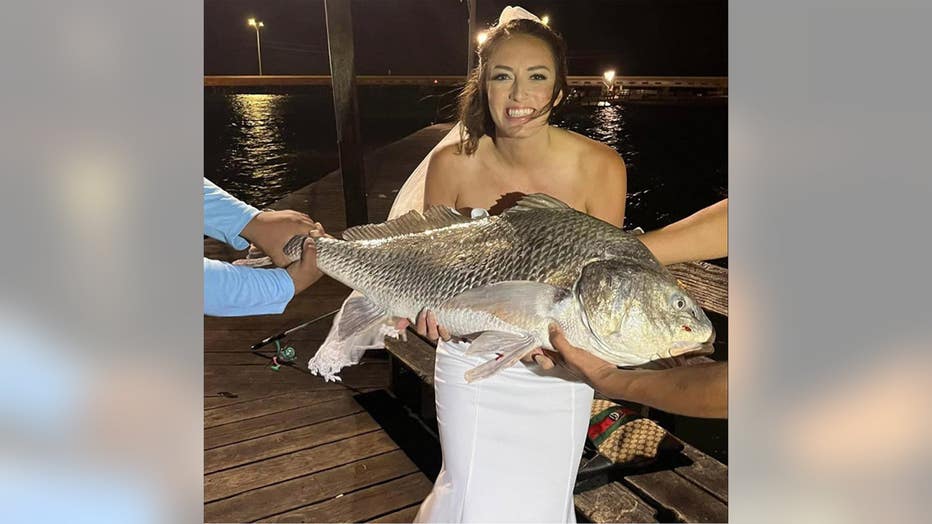 Because the line on the fishing pole was so thin, Granville said she was careful about how she reeled in the fish.

After about 10 to 15 minutes, she got the fish close to the pier. Earnie borrowed someone’s net and together, the newlyweds and some nearby fisherman got the drum onto the pier.

"Everybody’s adrenaline was going," Granville said. "We were so excited. We got him up there and I was shocked at how big he was."

Granville said the fishermen estimated the drum was about 50 pounds.

Because of fishing regulations in the area – and the sheer size of the fish – Granville released the drum back into the water after taking a few pictures, she said.

For Granville, the fish was more than just a great catch.

"My sister and all my friends, they were like, ‘It’s a gift from your dad,’" Granville said of her father, who died in August. "He loved fishing."

"We were extremely close," she added. "He was my best friend. So my sister was like, ‘It’s your dad watching over you.’ I thought that was really sweet."