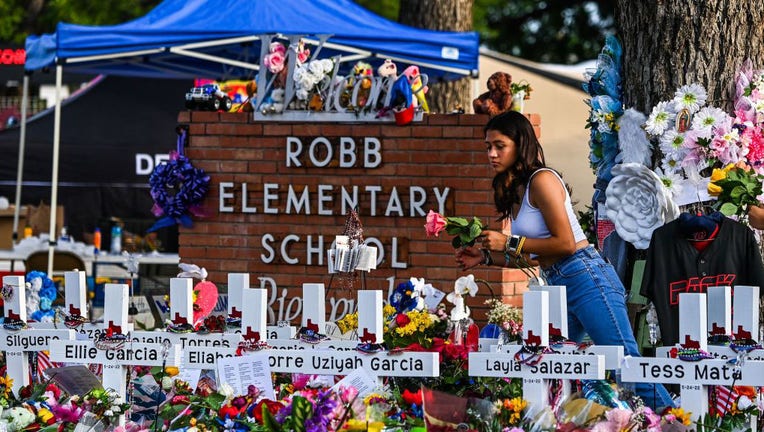 A girl lays flowers at a makeshift memorial at Robb Elementary School in Uvalde, Texas, on May 28, 2022. (CHANDAN KHANNA/AFP via Getty Images)

AUSTIN, Texas - Texas House Speaker Dade Phelan established an Investigative Committee to conduct an examination into the circumstances of the shooting at Robb Elementary School in Uvalde, Texas.

On May 24, 19 children and two teachers were killed by a gunman at Robb Elementary School. Following the tragic incident, Gov. Greg Abbott has taken several actions to provide all available resources to support the community.

"The fact we still do not have an accurate picture of what exactly happened in Uvalde is an outrage," said Speaker Dade Phelan. "Every day, we receive new information that conflicts with previous reports, making it not only difficult for authorities to figure out next steps, but for the grieving families of the victims to receive closure. I established this investigative committee for the dedicated purpose of gathering as much information and evidence as possible to help inform the House’s response to this tragedy and deliver desperately needed answers to the people of Uvalde and the State of Texas."

Gutierrez doesn't know if the information was ever relayed to any of the 19 law enforcement officers from different agencies who were staged in the school hallway as the shooting continued.

The following individuals have been appointed to the committee:

The investigative committee, which possesses the power of subpoena and is authorized to conduct depositions and initiate discovery, has been tasked with collecting and analyzing evidence from law enforcement, making comprehensive findings, and reporting its conclusions as soon as possible to help inform the work of the House.

In addition to the formation of this new investigative committee, Speaker Phelan also issued a series of joint charges to the Select Committee on Youth Health & Safety and Homeland Security & Public Safety Committee.

Six additional House members have been appointed to the Select Committee on Youth Health & Safety – five of whom represent cities that have experienced a mass shooting in recent years.

Rep. Drew Darby has also been appointed to serve on the committee, as he recently served as the Chair of the House Select Committee on Mass Violence Prevention & Community Safety.

"These individuals possess decades of experience in civil and criminal litigation matters – skill sets I believe make them best equipped to meet the objectives of this committee and its investigation. I know each of them to be diligent, thorough, and focused professionals whom I trust will do everything in their power to deliver facts and answers at a time when they are needed most," Speaker Phelan added.

The community is mourning the victims of last week's school shooting as funerals start this week. All of this, along with growing outrage over what appears to be a bungled response to the mass shooting by local law enforcement.