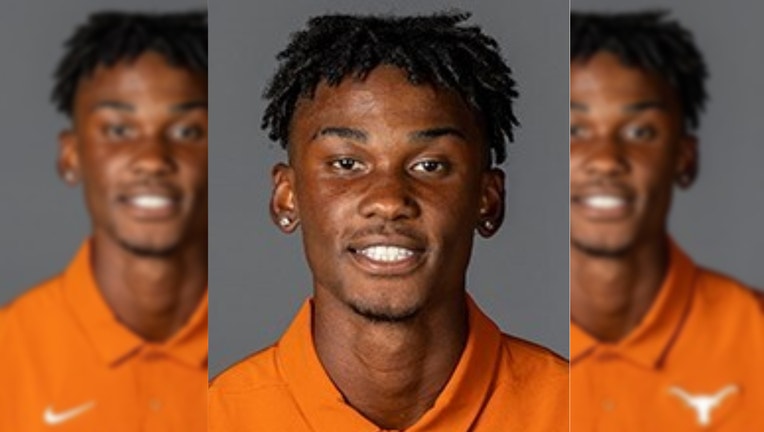 Ishmael Ibraheem has been charged with assault causing bodily injury-family violence and interfering with an emergency call for the Sept. 26 incident; both are Class A misdemeanors. (UT Austin)

AUSTIN, Texas - Texas Longhorns defensive back Ishmael Ibraheem has been suspended indefinitely after he was arrested and charged with assaulting his girlfriend.

Ibraheem has been charged with assault causing bodily injury-family violence and interfering with an emergency call for the Sept. 26 incident; both are Class A misdemeanors.

"We're aware of the situation with Ishmael Ibraheem. We have talked to his family, and he has been suspended indefinitely from all team activities at this time as we continue to monitor the legal and University processes," said Texas Longhorns head coach Steve Sarkissian in a statement.

According to an arrest affidavit, a woman called 911 saying she was involved in a fight in her boyfriend's dorm room and that she had been pushed down the stairs outside his room. During a second call, dispatchers could hear a verbal disturbance and the woman told them her boyfriend was trying to pull her out of her car, and the call disconnected.

Officers arrived at the scene and spoke to her, and located and detained her boyfriend, identified as Ibraheem. The woman told officers she had gotten in an argument in Ibraheem's dorm room and that Ibraheem had locked himself inside the bathroom.

The woman then said she began gathering her things to leave and Ibraheem came out of the bathroom, pushed her in there and attempted to take her possessions from her. She then pushed him back, and they exited the room into the hallway, where Ibraheem "forcefully took the items out of her hands," says the affidavit.

As she entered a nearby staircase to put more distance between then, she told officers he pushed her down the stairs, causing her to fall and hurt her hands. She then left the dorm, going to her car, and says Ibraheem was following her. She called 911 and was on the phone with dispatchers when he "forcefully took [her] cell phone from her hand and disconnected the call," says the affidavit.

The affidavit states that Ibraheem told officers there was an argument in his dorm room and there was physical pushing between both of them. He also allegedly admitted to pushing her down the stairs and taking the cell phone, due to her "telling lies."

Bail for both charges was set at $2,000 and included a no contact order and instructions to stay 200 yards away from the woman.