The National Football League announced Friday that teams can begin reopening their facilities on Tuesday if state and local governments will allow it.

The National Football League announced Friday that teams can begin reopening their facilities on Tuesday if state and local governments will allow it.

State leaders are eager to get things moving.

And the lieutenant governor has some ideas on how to get players and fans back in the game.

Texas Lt. Governor Dan Patrick said he understands, like every aspect of reopening, there is risk.

Sports leagues have worked on plans to reopen ever since having to shut down due to the COVID-19 pandemic. 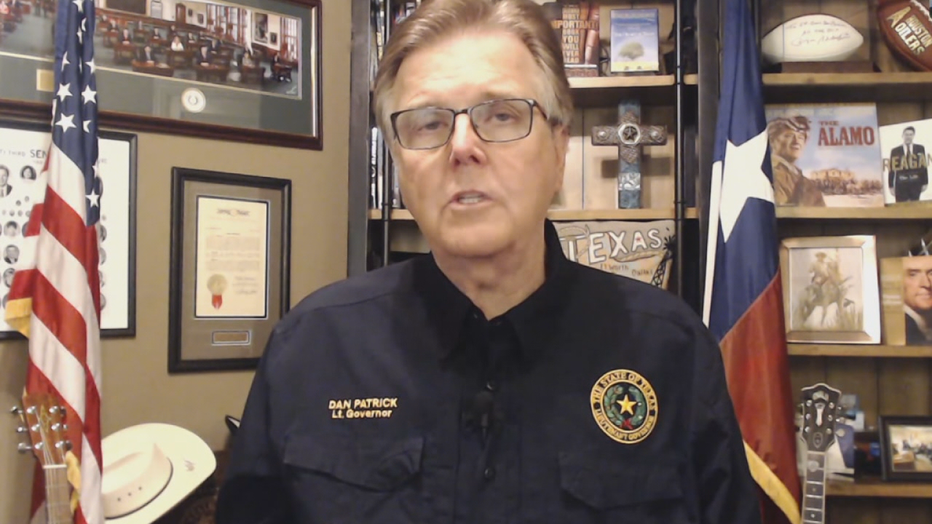 “There’s no reason for the games not to begin and for the fans to be in the stands at some level,” he said.

Patrick wrote an op-ed in the Dallas Morning News that was published Friday.

He proposed the idea of stadiums hosting 30 percent attendance, with fans being limited to the number of games they can attend.

He suggested checking their temperatures at security entrances, having sanitizing stations throughout each venue, wearing masks, and abiding by social distancing seating charts that he said can be done with a computer program.

He suggested fans exit by section to avoid congestion.

Major League Baseball owners have reportedly okayed a plan that would lead to resuming play in July, without fans.

The Texas Rangers told FOX4, relating to the governor’s idea, in part, “...we don’t know if the MLB season will resume in any form at the present time...with where the situation is right now, the potential scenario of playing with fans at Globe Life Field really has not even been addressed.”

“So the lead up to writing this editorial was really hearing Dr. Fauci talking about every aspect of our life and I don’t want him to become the commissioner of the NFL or the NBA,” Patrick added.

Dr. Anthony Fauci, the country’s leading public health expert, has said the lack of broad access to testing that quickly yields results might mean we have to go without sports for this season.

Lt. Gov. Patrick believes Texas has led the way in reopening the economy.

“And we can see that we have the lowest death rate per capita in the country and probably in the world or close to that. Our hospitalizations have been flat for some period of time. We know people go to Walmart, Costco, and grocery stores and churches now,” he said.

He also floated the idea of having teams printing statements on tickets, that they would not be liable if fans get sick.

Still, he believes adding fans to games can be done safely, and that it will further help the economy while also boosting morale.

Patrick did not address whether it would be financially viable for teams to have a limited number of fans in the stands.

FOX4 also asked the Cowboys, Mavericks, and Stars to comment, but each chose not to.