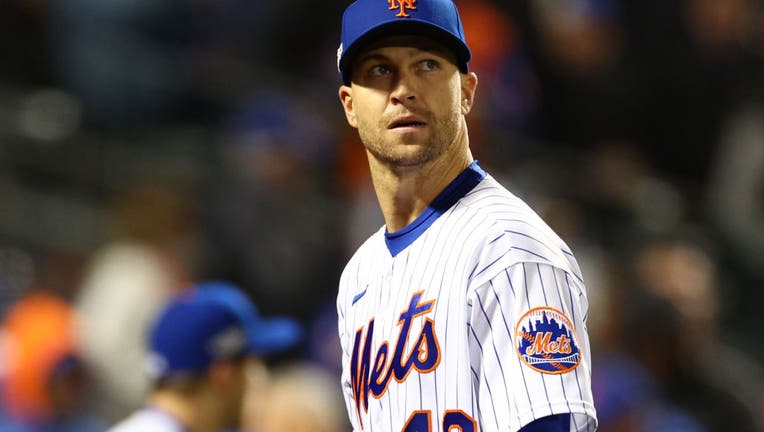 NEW YORK, NEW YORK - OCTOBER 08: Jacob deGrom #48 of the New York Mets walks out of the fourth inning against the San Diego Padres in game two of the Wild Card Series at Citi Field on October 08, 2022 in New York City. (Photo by Elsa/Getty Images)

After making his first start last season in early August, deGrom went 5-4 with a 3.08 ERA in 11 outings. He helped the Mets reach the playoffs, then opted out of his contract to become a free agent.

Texas announced the signing Friday night after the 34-year-old deGrom passed his physical. A person with direct knowledge of the deal disclosed the financial terms to The Associated Press. The person spoke on condition of anonymity because the club did not announce those details.

"We are thrilled that Jacob deGrom has decided to become a Texas Ranger," executive vice president and general manager Chris Young said in a statement. "Over a number of seasons, Jacob has been a standout major league pitcher, and he gives us a dominant performer at the top of our rotation. One of our primary goals this offseason is to strengthen our starting pitching, and we are adding one of the best."

Texas went 68-94 last season and then hired Bruce Bochy as its new manager. The Rangers' six straight losing seasons are their worst skid since the franchise moved from Washington in 1972.