AUSTIN, Texas - Venture out about 20 miles northwest of Austin, and you’ll eventually find Lake Travis — the favored boating and recreation destination. The pickup trucks and SUVs pulling boats are an easy tipoff this time of year. What you won’t be immediately aware of is that the Lake Travis Independent School District, which serves about 11,357 students, is getting ready for a tense school board election.

Pre-pandemic there wasn’t much interest in spending Wednesday evenings at a Lake Travis ISD school board meeting — or much close attention paid to how members voted. Lake Travis ISD would consistently rank high in academic performance, keeping most parents pretty happy. 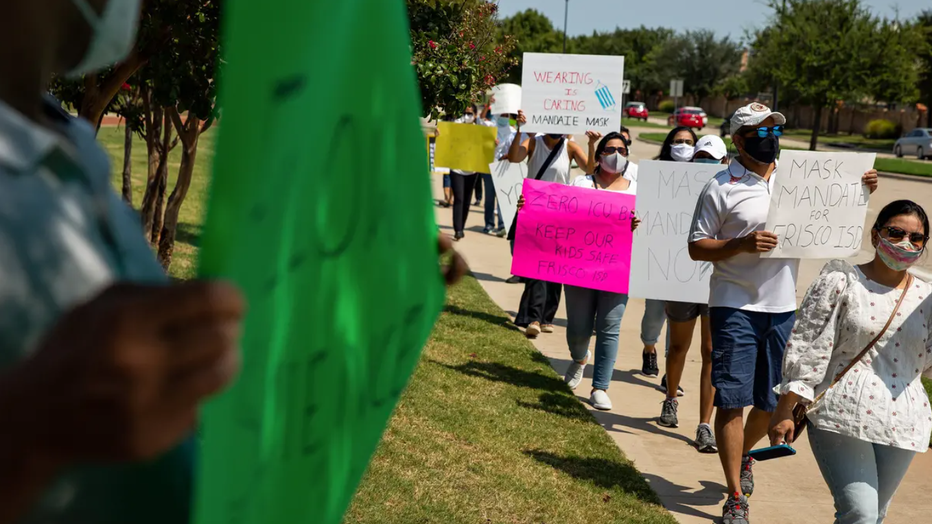 Parents demonstrate in front of the Frisco Independent School District building demanding a mask mandate for the district and improved sanitation and air conditions for students in Frisco on Sept. 10, 2021. The demonstration was organized by Unified (Shelby Tauber for The Texas Tribune)

Before 2020, the biggest issue grabbing parents’ attention was the occasional personnel matter. And most recently, the community might be asked to consider approving bonds to pay for another high school as the district continues to grow, attracting some of the influx of new residents flocking to Austin.

But now, two years later, there’s a laser focus on school board races as angry debates over masks, race and sex have unfolded between parents and school boards on weekday nights all over the state.

And in Lake Travis, Erin Archer, candidate for place 3 on the Lake Travis school board, has seen her community become more engaged with the school district and how it operates — more than she’s seen in the last 15 years.

"Pre-pandemic and [before] the new focus on cultural issues, I would say our school board was pretty quiet," Archer said.

But since the pandemic began, parents in Lake Travis and statewide have been at odds over mask mandates and the closing of schools to prevent COVID-19 exposure. In the last year, there’s even more focus than ever on whether what Gov. Greg Abbott has called "pornographic" books — specifically books on sex or gender identity — are making their way into school district libraries.

Although school board races are nonpartisan, it’s never been hard to determine what political stripe a candidate bears depending on which school issues a candidate holds dear. But those subtle differences have become more pronounced and voters can now easily identify who is a Republican and who is a Democrat.

And for the first time, there’s more money in these races. Across the state, a handful of political action committees have formed to fuel the campaigns of more conservative candidates who promise to keep critical race theory out of schools and potential future pandemic-related restrictions like school closures and mask mandates at bay.

Most of these PACs have been started in North Texas and have followed the Southlake playbook, in which mostly white parents in the North Texas suburb were able to place people on the school board that are against a plan to diversify its curriculum.

Last month in the Central Texas Hill Country, Lake Travis-area parents launched the Lake Travis Families PAC. Heading into the May school board election, the PAC has about $19,000 cash in hand, the latest campaign finance reports show. There are three seats up for election in Lake Travis in May, and the PAC has endorsed candidates that stand against mask and vaccine mandates and school closures.

Christian Alvarado, a Lake Travis ISD parent and one of the PAC’s founders, said in a Facebook post on Feb. 3 that parents should be making choices for their kids and that he does not believe in the "modern progressivism that claims my kids are oppressed because they are Hispanic."

"I want my kids taught how to think, not what to think, with age-appropriate curriculum," he said online.

Alvarado, an Abbott appointee on the Texas Department of Motor Vehicles Board, said in the post that he hopes the school board race doesn’t further divide the community. One of the PAC’s goals is to "lower the temperature" as the district has seen flare-ups in the battle to settle what books should be in schools and if masks should be mandatory.

Alvarado did not respond to a request from The Texas Tribune for comment.

The PAC’s leadership did not respond to a request for comment and its strategist, Brendan Steinhauser, did not want to speak on the record. Steinhauser, who is a partner at a public relations and political communications firm called Steinhauser Strategies, has worked with Republicans such as U.S. Rep. Dan Crenshaw of Houston and state Sen. Angela Paxton of McKinney.

In mid-February, Steinhauser told Politico that they had the goal of raising $100,000 for the school board races and wanted to protect incumbents who voted against mask mandates.

Trying to raise that kind of money for a school board race is unusual, said Rebecca Deen, a political science professor at the University of Texas at Arlington. Usually, that kind of fundraising money is seen in campaigns for state representatives.

While the Lake Travis PAC wants to try to keep political temperatures low, Deen said it’s hard for school board races not to be political as the issues that the PAC presents have been the focal point of Republican politicians.

If school board races continue to become more and more partisan, Deen said it will derail what school boards are about, which is to work for the community and not for a political stance.

"I’m glad that we are paying attention to school boards, but I fear that it is the wrong kind of attention or for the wrong reasons," Deen said.

The difference now, Deen says, is that parents are organizing, mobilizing and raising money to back their favored school board candidate — and it’s all against the backdrop of the nationwide narrative that critical race theory, or CRT, is being taught in schools and there is "pornographic" content available to children.

And while school boards have been contentious and combative, Stephanie Knight, dean of the Simmons School of Education and Human Development at Southern Methodist University, said these conservative groups will use language that is appealing to all types of voters, not just the ones yelling at school boards.

"We still have to be wary of the underlying agenda because ultimately that agenda could cause divisiveness and could keep us from focusing on other educational issues," she said.

Parents have been emboldened by Republican politicians who have run on the notion that critical race theory is taught in public schools and it must be kept out, even though Texas lawmakers last year passed a law that they say bans it from being taught.

Critical race theory is a university-level course, not taught in secondary schools. It holds that racism is embedded in the country’s legal and structural systems. That hasn’t stopped some Republicans from labeling anything that is for diversity or inclusivity as critical race theory.

Some PACs like Southlake Families in North Texas have said critical race theory is being taught in schools. While Lake Travis Families hasn’t named CRT as an issue, they instead stand against what they loosely call "political indoctrination."

The Lake Travis Families PAC has so far endorsed Archer and two incumbents. One of her goals, she says, is to take politics out of the schools but knows that issues such as mask mandates and CRT have become political.

"We need to really focus back on the actual education and take a lot of the political rhetoric and drama that surrounds the classrooms way down," Archer said.

But not everyone is buying the PAC’s mission.

Laurie Higginbotham, who is running against Archer for the Place 3 seat, said the PAC claim that it is nonpartisan isn’t true because of their views on masks and how they fear that critical race theory materials may be pushed into the district.

Higginbotham also points out that the PAC is not interested in the issues such as student overcrowding and a bond measure that would fund a second high school in the district.

"Why are you focused only on political wedge issues and not issues actually facing our schools?" she said. "They’re trying to pretend to be nonpartisan, but the people who are driving this train for the PAC, they have another agenda."

James Henson, director of the Texas Politics Project at UT-Austin, said state Republican politicians see this move into school board elections as one more way to unify the party.

"There’s a pretty clear effort by Republican candidates to take back the public education issue away from Democrats," Henson said.

But, in Central Texas at least, some Democrats won’t stay silent.

On March 8, Texas Blue Action, a liberal organization geared toward mobilizing voters, announced the formation of Safe Schools for Texas, an organization that will endorse school board candidates in the upcoming May elections. The group will focus on races in Round Rock, Dripping Springs, Eanes, Hays, Comal, Lake Travis and Spring Branch districts.

Lana Hansen, president of Safe Schools For All, said this group is trying to counter conservative talking points.

To Hansen’s knowledge, there haven’t been many Democratic organizations looking to challenge what conservatives have been doing and she believes that’s has been a mistake.

"We want to believe that what we’re seeing on the other side is so absurd, that it wouldn’t be successful," she said. "But it’s turning out that it is in a lot of communities, and we don’t want to see that community be ours."

Disclosure: Facebook, Politico, Southern Methodist University and University of Texas - Arlington have been financial supporters of The Texas Tribune, a nonprofit, nonpartisan news organization that is funded in part by donations from members, foundations and corporate sponsors. Financial supporters play no role in the Tribune's journalism. Find a complete list of them here.