Federal authorities have arrested an American woman accused of trying to smuggle a shipment of dozens of rifles in trampoline packaging across the border into Mexico earlier this week.

Mayra Alejandra Padron, a 31-year-old from Houston, was arrested Monday at the Hidalgo port of entry – allegedly carrying 44 rifles, a single handgun, a dissembled M249 machine gun and almost 3,000 rounds of ammunition in the back of a gray Chevy pickup truck.

Padron allegedly told Homeland Security Investigations agents that someone paid her $200 to drive the Silverado from Houston to Mexico, that she’d made similar runs in the past and that she intended to open a cross-border shipping business.

Padron has a criminal record dating back to when she was just a kid – with a conviction for failure to identify or giving false information when she was 11 and for assaulting a public servant when she was 12, court documents show.

More recently, police charged her with aggravated assault with a deadly weapon in December, a case that is still pending.

The judge ordered her held without bond Tuesday, court documents show, citing her criminal record, flight risk and statements from her prior bondsman that alleged she had not followed her earlier release conditions. 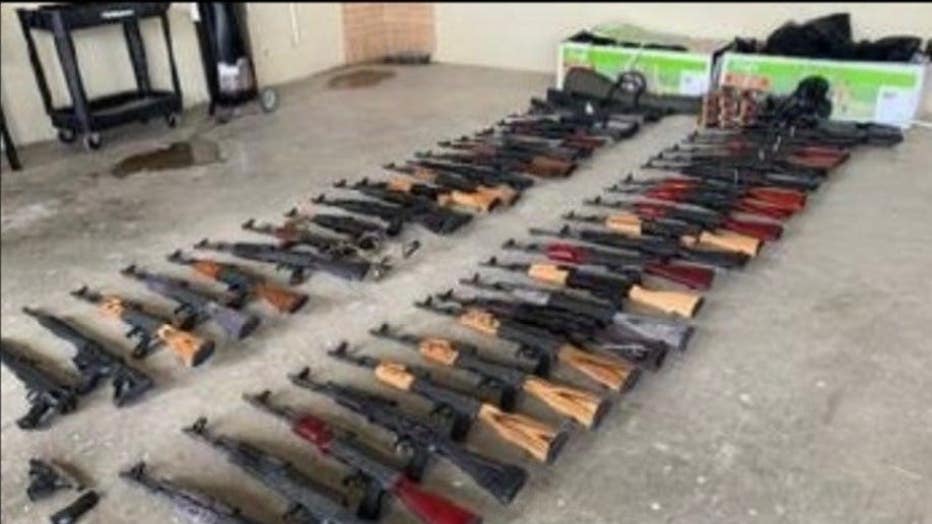 Mayra Alejandra Padron, a 21-year-old from Houston, was arrested Monday at the Hidalgo port of entry – allegedly carrying 44 rifles, a single handgun, a dissembled M249 machine gun and almost 3,000 rounds of ammunition in the back of a gray Chevy pic

Photos of the seizure show dozens of rifles lined up on a warehouse floor. They include AK-47 and SKS weapons.

Investigators from Homeland Security Investigations, the Bureau of Alcohol, Tobacco, Firearms and Explosives as well as U.S. Border Patrol and Texas Department of Public Safety took part in the bust.

During the interview, she allegedly gave conflicting statements, according to the criminal complaint. First, she told investigators she bought "merchandise" to bring to her brother in Reynosa, 40 minutes south of the border, then said it was for her brother’s neighbor, "Sergio."

"Later in the interview, Padron stated that an unknown individual went to her house and identified himself by saying that he was there on behalf of ‘Sergio’ to pick up her vehicle and load it with merchandise," the complaint reads. "Padron admitted that she ‘felt something was not right’ because ‘Sergio’ kept on ‘pushing’ her to get the trampolines delivered quickly."

She even allegedly accepted extra pay to leave Houston early – then "admitted that she was going to accept responsibility for what happened," according to the complaint.

An attorney listed for Padron did not immediately respond to a request for comment.