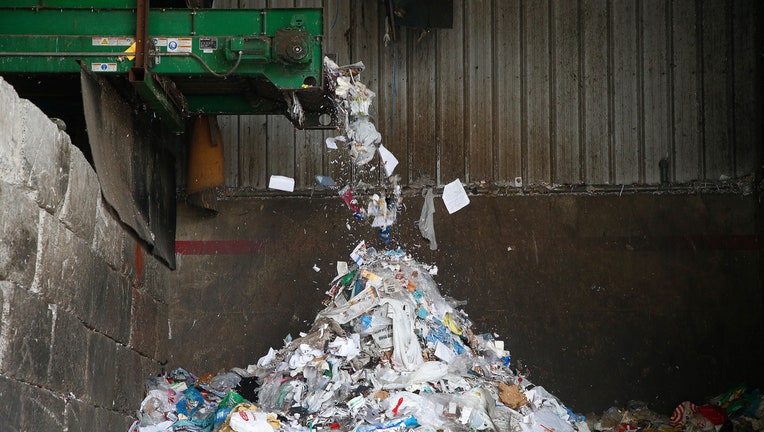 After being sorted, material to be taken to a landfill is piled up at the Green Waste material recovery facility on Thursday, March 28, 2019, in San Jose, Calif. (Aric Crabb/Digital First Media/Bay Area News / Getty Images)

WAXAHACHIE, Texas - A Texas woman was beyond amazed when a landfill crew was able to track down her engagement ring after she mistakenly threw it away.

Nelly Cabeen of Waxahachie shared the unbelievable story of her ring’s discovery on Facebook, explaining that she threw away the prized engagement ring “because of a miscommunication.”

“Friday morning I had to call [Turkey Creek Landfill] because I accidentally threw away my ring that my husband gave me when he proposed to [me] 5 years ago,” Cabeen wrote on Facebook. “The ring meant everything to me and because of miscommunication I accidentally threw it away!”

The woman goes on to write that the trash had been already been picked up when she realized what she had done.

Quickly, Cabeen called the landfill and spoke to a woman identified as Karen Fuller, the special waste coordinator at the landfill, who told Cabeen the “process of how things were done from curbside pick up all the way to the landfill.”

“As she’s telling me the process my heart was shattering bit by bit knowing that I would never see my ring again,” the woman wrote, before adding Fuller was “so sweet and empathetic,” albeit “realistic.” “She … wanted me to stay realistic to the fact that finding a ring was like finding a needle in a haystack.”

Fuller took down details about the trash bag color and what the ring looked like before contacting the garbage truck driver about the missing prized possession.

Miraculously, the driver had taken his lunch after completing his collection route, which meant the trash had not yet been taken to the compactor and crushed. Together, employees Joseph Soto, Adolfo Calleja and Tyler Harwood searched through 10 tons of trash for the ring, People reported.

Somehow, within a mere 10 minutes of sifting through trash bags, Calleja “caught a glimpse of a ring” and managed to rescue it, he told KTVT.

The group washed the jewelry and reached out to Cabeen to see if it was hers — which left her stunned.

“I was floored they found [the ring],” she wrote. “Adolfo and Soto were a HUGE contribution to finding it. They looked through thousands of pieces of trash to find something special for someone they didn’t know. They did NOT have to do that yet they went beyond their call of duty to help, and for that I am forever thankful!”

“I want to give them all the recognition I possibly can because they deserve it! In a world full of wrong and hatred, this truly shows and proves there are still amazing humans in this world and they work for your company," she said in a comment directed at Waste Connections, the waste-management company.

"Waste [Connections] is very lucky to have Karen, Soto and Adolfo to be apart [sic] of your team."