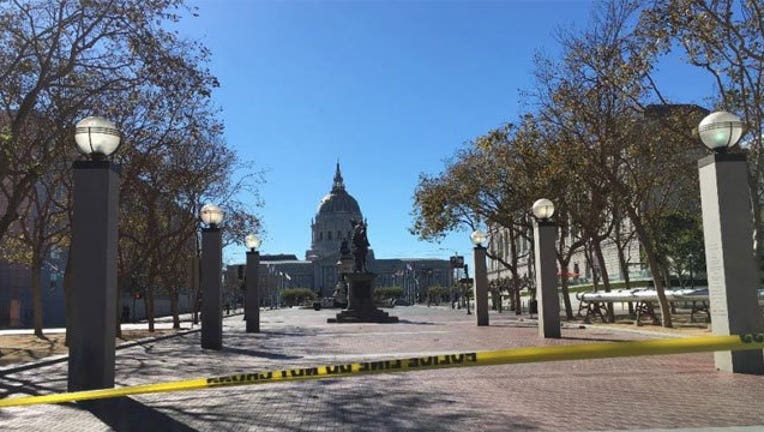 SAN FRANCISCO (AP) — The Latest on a standoff at San Francisco's Civic Center (all times local):

Police say an ongoing standoff with an armed and suicidal man has shut down San Francisco's Civic Center and nearby United Nations Plaza.

Police spokesman Carlos Manfredi says the man called 911 around noon Saturday to say he was going to harm himself and any officer who came close to him.

Negotiators who made contact with the man at the plaza reported seeing a handgun in his pant pocket.

They have been talking to him for more than four hours as the area around City Hall was emptied of pedestrians and motorists.

Manfredi says police were trying to resolve the situation peacefully.

The standoff caused traffic to back up in the area around City Hall.

A police standoff with a possibly armed man has prompted the evacuation of San Francisco's Civic Center and nearby United Nations Plaza.

The San Francisco Chronicle reports (http://bit.ly/2cZLGFS)people in nearby buildings were told to leave and traffic into the area was blocked off Saturday as negotiators try to talk to a man who is threatening to commit suicide.

Police spokesman Carlos Manfredi told the newspaper the man called police around noon saying he was thinking of hurting himself and possibly other people.

Manfredi issued a plea to news helicopters to leave the scene out of concern that the helicopter noise was interfering with negotiations and creating a hostile situation with the man.

The standoff caused traffic to back up in the area around City Hall.

Police in San Francisco have blocked off traffic around Civic Center and United Nations Plaza after receiving reports of a man who might be armed.

KGO-TV said Saturday that pedestrians and motorists are being asked to leave the area amid reports of a man holding up something that may be a weapon.

The television station says police are attempting to communicate with the man.